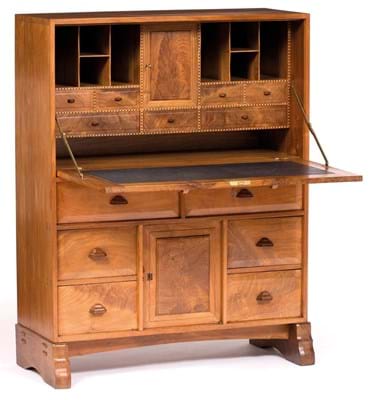 The December 7 sale included not only another tranche of superbly provenanced Cotswolds work by Peter Waals, but also an armchair identified as made by Gillows, c.1875, to a design by the great Edwin William Godwin (1833-86), the hugely influential architect and designer.

The armchair could not be identified in Susan Weber’s important 1999 book on Godwin but, as auctioneer Philip Smith said, the book is not exhaustive.

The chair with red and green ‘Griffen’ pattern upholstery was of superb quality with many aspects of Godwin’s output, and Smith found a Gillows stamp hidden underneath and on a curve.

He left the estimate at £300-500 but knowledgeable bidders obviously agreed with his assessment.

“It needed a lot of work but the upholstery fabric was original and in good condition and dealers loved it,” said Smith when the armchair went to the trade at £7600.

Cataloguing was more straightforward concerning four pieces provenanced back to Arthur Mitchell, the brewery heir who was a great patron of the Cotswolds furniture makers and, in particular, of Waals, one-time foreman at the Barnsley and Gimson workshops.

Part of the same tranche which sold with considerable success at Oxford in May, the top-seller of the quartet was a walnut bureau cabinet with holly and ebony inlay. This was recorded in the Waals ledger as purchased by Mitchell in 1931 as part of a wedding present for his daughter.

Illustrated above, the 4ft 3in (1.29m) tall cabinet featured a fall front with strapwork which opened to reveal drawers, a cupboard and compartments. It was similar, although not identical, to a number of Waals bureau cabinets which have been sold fairly recently.

The £4000-7000 estimate caused a few to wonder if it was a signal that this dedicated, but limited, high-worth market had seen one too many coming onto the market of late.

Although it is dangerous to compare non-identical items, the bidding fell well short of the £34,000 a similar cabinet made at Bearnes Hampton & Littlewood in Exeter in October 2014 and the £42,000 one took at Essex saleroom Sworders last January.

Nevertheless, the vendors and auction house were happy to see the cabinet quadruple the lower hopes, going at £16,000.

Other bids for Waals material with the same fine provenance were more in line with expectations.

A 5ft 11in tall x 4ft 6in wide (1.8 x 1.37m) oak dresser, with chamfered supports to the panel-back upper half and metal studded doors with wooden locks to the lower half, went within estimate at £4600.

Two walnut centre tables, each with ebony and holly inlay, after designs by Ernest Gibson, were each estimated at £2000-3000.