William Moorcroft (1872-1945), an art school graduate and the son of a Burslem china painter, was first employed in 1897 as a 24-year-old designer for the commercial pottery and porcelain firm of James Macintyre & Co. 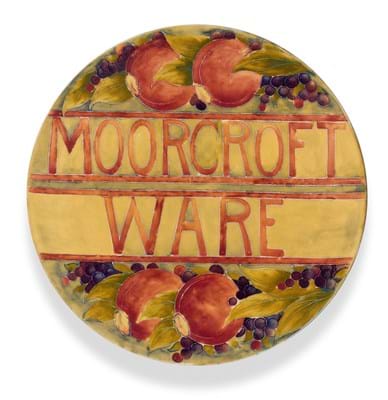 Within a year he was in charge of the company’s ornamental ware department and, by 1904, the Art Nouveau-influenced Florian Ware that perfected the technique of trailing slip known as tube-lining had won him a gold medal at the St Louis International Exhibition.

It was this level of success, and Moorcroft’s desire to personally oversee production, that prompted him to open an art pottery of his own in 1912 on Sandbach Road, Cobridge. He was backed by the famous London store Liberty & Co. where many of his products were sold.

In 1935 Moorcroft’s son Walter (1917-2002) joined the firm and introduced many of his own styles and designs into the catalogue after he took the reins of the company in 1945. Unusual forms in otherwise commonly encountered patterns will command a premium. This silver mounted clock in the big poppy or anemone pattern, 6in (15cm) high, sold for £5800 at Tennants of Leyburn in November 2010.

While elements of the market have undoubtedly lost some zip in the past decade, Moorcroft remains enormously popular with a broad range of buyers from the English-speaking nations and beyond.

Prices begin at £20 for a piece of Powder Blue (the blue-glazed domestic tableware used in Liberty’s subterranean cafe from 1913-63) or a post-war pin tray. Plenty of recent issues, still using the trademark tube-lining technique, come to the secondary market priced below £100.

However, while some modern editions (particularly those from the Sally Tuffin era in the 1980s) can bring substantial sums, it is the William and Walter pieces which are most sought after. These are further distinguished by date, pattern, shape, size, ground colours, glaze type and the quality of execution. Early patterns in the Art Nouveau or Arts & Crafts taste are typically the most highly regarded. Among the Macintyre ranges were Poppy (1898), the Hazeldene landscapes with trees (1902), Claremont with its toadstool motif (1903), Tudor Rose (1904) and the largely monochromatic Flamminian Ware showing Moorcroft’s growing interest in the use of lustre glazes.

Pomegranate (1910), Spanish of the same year and Pansy (1911), along with Wisteria (1910), all showed a subtle change of direction, while landscapes such as Moonlight Blue (1922), Eventide (1923) and Dawn (1926) won acclaim at the Paris exhibition of 1925 for wares reflecting the style of the Art Deco period. The Walter Moorcroft era is typified by vivid large flower designs.

Some patterns enjoyed long cross-period production runs, so dating Moorcroft can be difficult. However, the wide variety of impressed and printed marks and (if they survive) factory paper labels used across more than a century of production do make the task much easier.

It helps that the best pieces are signed. With the advent of the Florian range in 1903, William Moorcroft took responsibility for all aspects of production and firing and almost every piece carried his hand-painted signature.

At the top of the pile are rarities such as the Yacht vase sold by Bonhams in 2010 as part of the Wright collection for £10,000 or the factory record £28,000 bid for a Macintyre Hesparian Ware jardinière and stand when Sotheby’s sold the first part of the Albert Wade collection in 2002. More recently it resold for £22,000 at Woolley & Wallis as part of the Ken Manley collection in 2012 alongside a flambé glazed double-gourd Carp design vase c.1914, also hammered at £22,000.

Moorcroft father and son both experimented with high-temperature flambé glazes for which a special kiln was built in 1921 and these lustrous wares are currently hugely popular. Advertising wares or patterns made exclusively for export also make for desirable rarities. 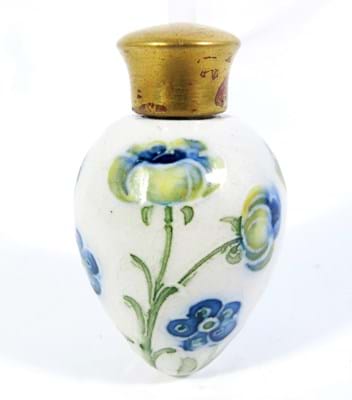 The ranges applied with period metalware, such as those with silver or pewter mounts by Liberty & Co. of London, or the all-over silver decoration applied in the US for sale in stores such as Tiffany in New York, also command a premium.

A Claremont pattern loving cup c.1905 with mounts by the California jeweller Shreve & Co sold for $27,500 (£18,000) at Clars Auction Gallery in Oakland, California in 2013. It was made specifically for export, as shown by the green painted mark to the base reading W Moorcroft, Shreve & Co., San Francisco.

Miniatures, produced in most patterns, are a collecting field of their own. Some tiny rarities from the Macintyre era can command sums to rival those for full-size versions.

Moorcroft Boy – another bid for victory

Adding lustre to a Moorcroft classic