Christie’s is to step up its operations in the Far East with its first permanent saleroom and gallery space in Hong Kong. Christie’s has signed a lease to take four storeys in The Henderson tower which is scheduled to open in 2024. Render by Cosmoscube.

From early 2024 the firm will relocate its Asia Pacific headquarters to The Henderson, an urban landmark on Murray Road in Central, Hong Kong scheduled for completion in two years’ time.

Christie’s currently rents space ad hoc for sales and gallery viewings focused around two annual selling seasons. But the announcement of the lease means that it will take four storeys in the tower amounting to a 50,000 square foot space.

Francis Belin, President of Christie’s Asia Pacific said: “The establishment of our first year-round saleroom and gallery space in Hong Kong provides us with the long-needed flexibility to transform our sales and events schedule from two main seasons a year, to year-round programming.

“This unprecedented initiative, together with our presence in Beijing, Shanghai and other key cities in Asia, will enable Christie’s to respond to and build upon the recent record surge in worldwide collecting we have seen from Asian clients.” 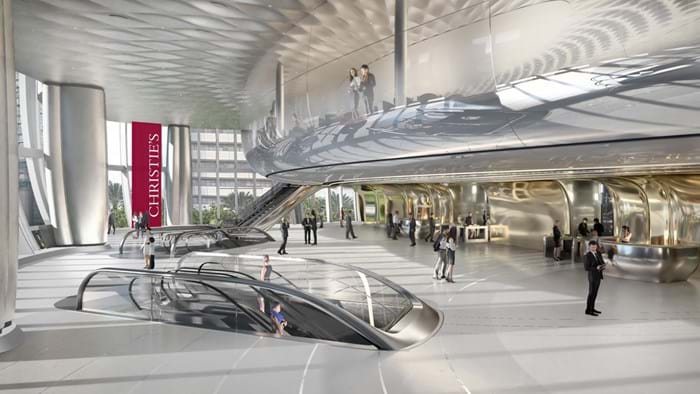 The envisaged lobby at The Henderson, Hong Kong which is being designed by Zaha Hadid Architects. Render by Cosmoscube.

Asian buyers have become the dominant force at the top end of the auction market, according to Christie’s most recent results.

The firm’s stats from the first half of 2021 included record participation from Asia Pacific clients who accounted for 39% of total purchases by value.

In all of the ‘luxury’ categories (jewellery, wine, watches and handbags) more than 50% of Christie’s offering was bought by clients from the region, with some niche areas now dominated by Far Eastern purchasers. Over 70% of watches at Christie’s were sold to Asian buyers. Buyers from the EMA countries (Europe, Middle East and Africa) accounted for 33% of transactions and the Americas 28%.

Total auction sales at Christie’s from January to June were $2.64bn, with private sales taking the headline figure to $3.5bn – 13% higher than pre-pandemic levels.