Like most enduring events, the Bath Decorative Antiques Fair boasts a formula both familiar and distinctive which has been tempered by gradual changes. 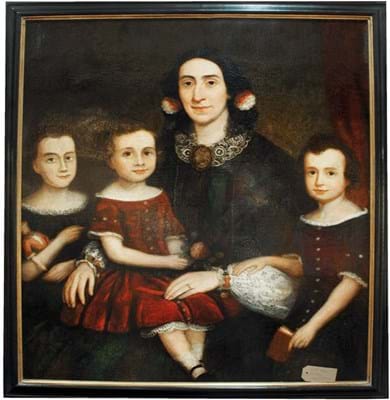 And, according to fair director Sue Ede, it has the right group of exhibitors to ensure its enduring strength and sparkle.

It might still take place in the same Bath Pavilion where it launched in 1989, but since dealer Robin Coleman started the event it has changed hands, sparked a sister event and borne witness to changing trends in the decorative trade.

Scandinavian by Design of Dorset brings this large red Modens Hansen three-seater sofa in buffalo leather, which is available for £2200.

These days, the decorative staples of the 1980s and ‘90s – which, organisers say, are back in fashion with a younger audience – rub along comfortably with mid-century furniture, industrial chic and Swedish painted furniture, all provided by the group of around 45 exhibitors.

“After five years of ownership I am still constantly surprised that the fair has its own momentum which seems to be largely out of anyone’s control,” Ede says. She bought the event in 2011 and organises it with her husband Peter Hodder.

“We bring a good logistical structure and work hard on the marketing but, in the end, it is the exhibitors who bring the character and atmosphere to the fair, which manages to hold its own on the international stage in spite of its humble venue.”

These exhibitors include stalwarts such as Cherrie and Michael Todd (see 5 Questions on facing page), who mark their 20th appearance at the fair this year.

Others attending for the first time include Nigel Bartlett Antiques with chimneypieces, grates and architectural items as well as pictures and furniture; King George Antiques offering advertising ephemera and architectural pieces; and Bombe Interiors bringing decorative French and Italian pieces for the home and garden.

Among the fair’s features is a trade-only preview day, on March 8 this year, for which the queue regularly snakes around the perimeter of the old venue. These early sales have recently included “a definite increase in traditional oak furniture”, according to Ede.

“The fair has become a barometer for buyers to check what is selling in the trade,” she adds. “This natural progression is how I believe the fair will survive into its next decade.”

Ede has worked to carry the fair’s legacy forward, launching The Bruton Decorative Antiques Fair in 2016. TallBoy Interiors from Lancashire brings this pair of butcher’s shop window pottery pigs, which are priced in the region of £225.

But she runs these fairs in addition to her annual schedule of Cooper Events Fairs (most recently The Pavilions of Harrogate Decorative, Antiques & Art Fair in January) as well as The Giant Shepton Flea Market. From this vantage point she has a comparatively wide view of the market. Now, more than ever, she says, it is time to celebrate exhibitors and to take heed of their needs.

“There is caution and some resistance in the ranks for 2018. Fairs are expensive to attend – not just stand fees but all the extra expenses which fall to the exhibitors,” she says. “We as organisers need to listen to our clients and try to help as much as we can in what could be a tricky year ahead.”

Other returning exhibitors this year include those from the Continent such as The Archives Antiques from Belgium and Bohm’s Antik from Sweden bringing Swedish provincial furniture. From the UK, Not Wanted on Voyage attends with a large selection of mid-century design and Linda North brings urns, jardinières, wirework garden furniture, statuary and objects.