With estimates from £700-15,000 here are five previews of upcoming items this week. 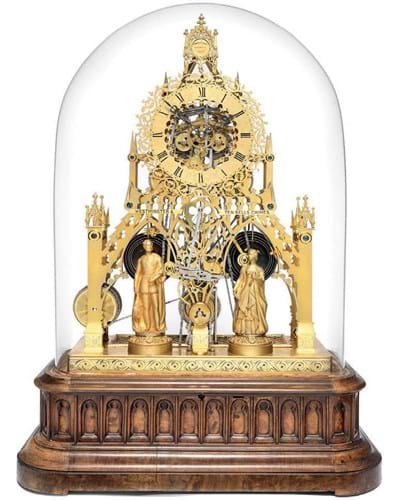 This exhibition-quality skeleton clock made by Camerer Cuss & Co to celebrate the Diamond Jubilee of Queen Victoria is estimated at £10,000-15,000 in Bonhams’ sale on July 15.

This exhibition-quality skeleton clock (above) was made by Camerer Cuss & Co to celebrate the Diamond Jubilee of Queen Victoria.

Prince Albert had died 36 years earlier but his legacy meant he was still a significant presence in 1897. The figures on the clock depict the young married couple in quasi-medieval style clothing in tune with the gothic decoration of the clock.

As well as quarter chiming, the movement features a remote winding and hand-setting function that overcame the need to remove the glass dome 52 times a year in order to wind the clock (the reason that so many 19th century skeleton clocks are now lacking their domes).

View and bid for this skeleton clock via thesaleroom.com. Robert Brough’s (1872-1905) art is often overshadowed by the drama of his untimely death: he suffered horrific burns in a train collision outside Sheffield.

A protégé of John Singer Sargent, the older artist rushed to comfort him in his final days and curated a memorial exhibition in celebration of his talent.

That Brough was a rising star can be glimpsed in the brushstrokes of this atmospheric 10½ x 18in (27 x 46cm) oil sketch offered by Lyon & Turnbull in Edinburgh on July 15.

Breton Women By Street Light, signed with initials, was included in Aberdeen Art Gallery & Museum’s 1995 exhibition devoted to the artist.

View and bid for this Brough picture via thesaleroom.com. Maiolica group depicting The Rest on the Flight to Egypt made in Urbino, c.1600 which is estimated at £800-1200 in Matthew Barton’s sale at Olympia Auctions on July 14.

With some minor restoration, it has a guide of £800-1200 at Matthew Barton’s European and Asian Works of Art sale at Olympia Auctions on July 14.

View and bid for this maiolica group via thesaleroom.com. This oil on canvas portrait by Rowland Henry Hill titled 'Dorothy Copeland Jerrold aged 33' is estimated at £700-1000 in the July 17 sale at David Duggleby.

The July 17 picture sale at David Duggleby in Scarborough includes a number of works by Staithes Group artists including this oil on canvas portrait by Rowland Henry Hill (1873-1952). Titled Dorothy Copeland Jerrold aged 33, it is signed and dated (19)05 and titled to verso.

View and bid for this Rowland Henry Hill picture via thesaleroom.com. Issued to RAF pilots and navigators, it includes one of the best chronometer-rated movements Omega ever produced, the famous cal 30T2. The watch has the RAF marking A>M 6B/159 and the issue number 5824/43 stamped on the stainless steel case back.

View and bid for this Omega watch picture via thesaleroom.com.