Portrait silhouettes were all the rage in fashionable English society of the Georgian period but suffered a rapid decline in popularity in Victorian times as photography began to dominate. 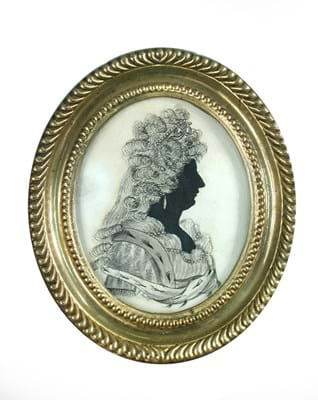 A classic showcase of the styles in vogue throughout that period, known as ‘shades’, is coming up at a Cambridge auction on September 12-13 when the Cheffins saleroom offers more than 26 rare silhouettes from a single-owner collection.

Amassed by a Suffolk private lady owner for over 40 years, all her collection is for sale with a total projected value of £5000-9000.

Created by artists such as Samuel Andrews, J Leith, Charlotte Le Page, Miers and W Clarke, the 18th and 19th century works depict portraits of society ladies and gentlemen and range in value from around £100 apiece to over £500.

According to the roving-artist.com website, the earliest professional silhouettists “were portrait miniaturists, seeking a less expensive product. Shades were popular as mementos, intended to be given away, and rapidly became an integral part of Georgian society.”

During Regency times there was “an increasing mechanisation of the art, in line with a general enthusiasm for all things modern and scientific. Many artists made use of camera obscura as well as other weird, quixotic, mechanical contraptions”.

The aim was to capture a likeness automatically - without relying on the skill of a “mere artisan” - a search which “eventually culminated in the invention of photography”. Shades were seen as ‘old hat’, adds roving-artist.com, and fashionable society flocked to photographer’s studios instead (many of which were run by former silhouettists). The 8cm high watercolour on paper, pictured top, is inscribed to the reverse ‘Mrs Siddons. Done in Soho London’.  Siddons was a famous tragic actress. She married William Siddons in 1773, from whom she separated in 1804. In 1777 she began ‘the circuit’ of York and Bath and spent four years performing at the Theatre Royal, Bristol.

Having been dismissed previously from performing at Drury Lane in 1774, Siddons made a triumphal return to London in 1782-3. Her ability to perform with ‘boldness; tempered with exquisite grace’ was remarked upon in a report on her death in The Examiner (London), on June 12, 1831.

The Vettriano factor of 1888 ... Backdated feel-good nostalgia and a limited technique ... does Sadler’s appeal sound familiar?