The silver eight-Reales coins struck in Mexico City in the 1530s are sometimes referred to as the ‘first dollar of the New World’. 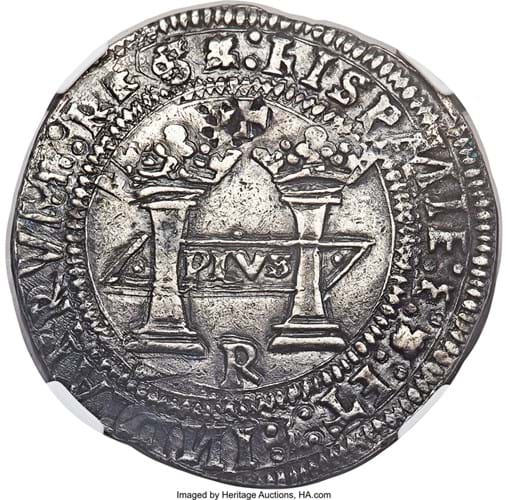 This is due to the fact that it was the first dollar-sized coin struck in the Americas after the Spanish opened a mint there in 1536 by royal charter.

The earliest surviving examples are the three known pieces struck in 1538 which were recovered in 1990 from the shipwreck known as the ‘Golden Fleece’ (sunk in the northern Caribbean in c.1550).

The finest of the three was consigned to Heritage Auctions’ coin sale in Philadelphia on August 14-19. Heritage has sold various items from the ‘Golden Fleece’ in the past, including a Gold ‘Finger Bar’ which fetched $39,950 including premium in 2016. “No major museum holds one of these three coins in its collections,” said Cristiano Bierrenbach, Heritage Auctions’ executive vice president of international numismatics, “and that’s why auctions such as this are an extraordinary opportunity to own one of the world’s historically most important coins.”

The coins are thought to have been minted by native workers and feature Gothic-style letters on the obverse with the crowned royal shield of Spain. The reverse bears the Pillars of Hercules with a banner with the words ‘PLVS’ or ‘beyond’.

Bierrenbach added: “The bold design of Spain’s 1538 eight Reales is highly symbolic. It signifies the end of the middle ages and establishes Spain’s powerful accomplishment of settling the New World.” More highlights from Heritage Auctions’ numismatic sale taking place in Philadelphia, coinciding with the city’s World's Fair of Money, will be covered in next week’s print edition of ATG.