The 29th staging of TEFAF Maastricht will go down as a good edition of the fair with dealers reporting decent sales overall and the changes made for this year’s event meeting general approval among the standholders. The stand of Colnaghi at TEFAF 2016. The London-based Old Master dealers made seven sales on the first day of the Maastricht fair. Image courtesy of TEFAF. Photographer: Harry Heuts.

The organisers reported a footfall of 75,000 visitors over the 10 days with numbers on the frantic preview day running to over 10,000.

People crammed into the lobby of the MECC venue as the doors of the fair opened on March 10 but, once inside, there was a noticeably improved flow of visitors around the stands thanks to the redesign of the main entrance and the wider central arteries.

Big-ticket sales announced as the fair got underway included a fine Roelandt Savery (1576-1639) still life purchased by the Mauritshuis Museum in The Hague for €6.5m from Colnaghi.

The London dealers made a total of seven sales on the opening day, including a huge oil on canvas by Luca Giordano (1634-1705), The Calling of Peter and Andrew, which was sold to a private European collector. Its asking price was €2m.

Another major sale concluded before TEFAF opened was that of an early work by Rembrandt van Rijn (1606-1669) that Paris gallery Talabardon & Gautier were exhibiting on their stand. It was sold to the Leiden Collection, New York for a sum believed to be around €2m. 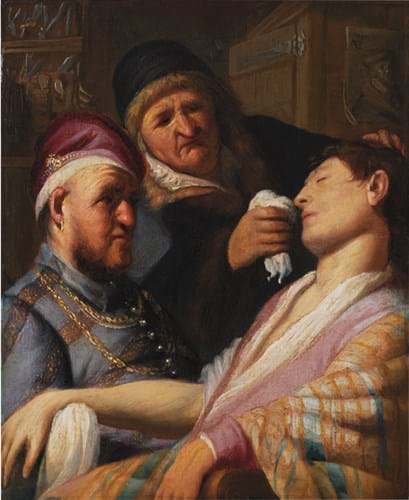 An early Rembrandt painting sold by Paris gallery Talabardon & Gautier at TEFAF 2016. Part of the artist’s series on the theme of the Five Senses from the mid-1620s, ‘Smell’, a 22 x 18cm oil on panel, sold to the Leiden Collection, New York.

Munich dealers Arnoldi-Livie sold two panels by Hans-Schäufelin (1480-1540) to a private collector who will lend the work to the Gemäldegalerie in Berlin. These panels had an asking price of €350,000.

Rafael Valls sold A View of the Moated Castle of Muiden with Figures walking on a Path or Fishing from a Boat, an oil on canvas by Gerrit Berckheyde (1638-1698), to Amsterdam’s Castle Muiderslot, which castle is depicted in the painting.

CEO of TEFAF Patrick van Maris said: “Our job is to provide exhibitors with the best possible platform on which to shine. Judging from visitor figures and reported sales, TEFAF 2016 has delivered this.”

One group of dealers who seemed to approve of the floorplan changes were those in the Works on Paper section upstairs. Both Stephen Ongpin and James Butterwick told ATG that visitors were able to find this area more easily and access had been improved with a larger entrance to the area and lifts.

Butterwick’s stand exclusively featured works by Alexander Bogomazov and he sold five on the first day, including two to the Kröller-Müller Museum in The Netherlands.

Another dealer in the Works on Paper section selling to an institution was Amsterdam’s E.H. Ariëns Kappers who sold a 1925 woodcut print Aristoteles Head by Samuel Jessurun de Mesquita (1868-1944) to The Metropolitan Museum in New York. The entrance to the Works on Paper section at TEFAF Maastricht 2016. Dealers in this area felt that access had been improved in helping visitors find them upstairs.