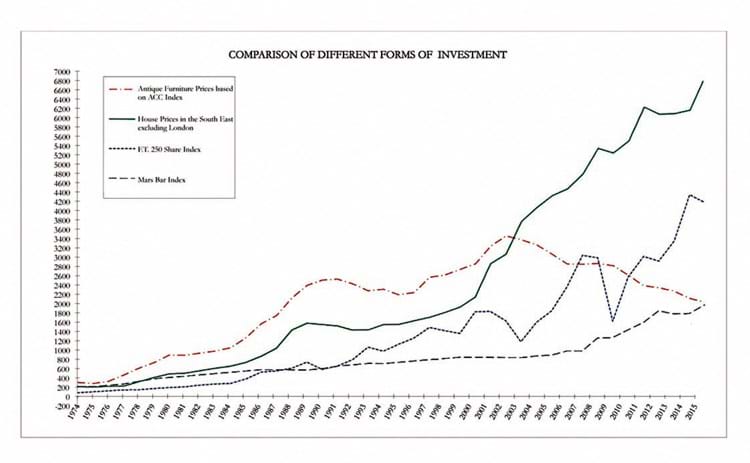 The Annual Furniture Index's comparison of different forms of investment

The AFI shows that prices dropped 7% in 2015, with pieces in the oak, country and formal dining categories worst affected.

The AFI is based on a blend of retail and auction prices for 1400 typical (rather than exceptional) items pictured in John Andrews' book British Antique Furniture.

Near-persistent decline has dogged the AFI over the past decade.

Such is the downward trend, Andrews said, that "it is not currently valid to promote antique furniture as a good comparative investment".

According to the AFI, antique furniture - a market that rode high on its investment potential in the 1970s and '80s - is now struggling to keep pace with inflation across 46 years.

In 2015 Oak (-9%) and Country (-15%) showed the vulnerability that has marked them among the biggest losers in recent years.

The Country index that stood at an apparently impregnable 3875 in 2008 is now down 53% to 2051. Andrews said much of the blame for the decline in this category can be placed at the feet of the kitchen dresser.

"Practical considerations come first [for buyers]," Andrews said. "The high dresser with a rack of shelves for display above may be a genuine antique, but it is currently considered to be too big for most households. The low dresser on legs, although attractive, makes inefficient use of space."

The top end is stronger but not immune. The three categories most associated with the wider decline in formal dining - Early Mahogany (-2.5%), Late Mahogany (-6%) and Regency (-9%) - fell once more after showing signs of returning to form in the 2014 results.

The flamboyance of 19th century furniture makes it vulnerable to fashion changes in interior décor, while bulky items are considered impractical.

For this reason Post-1770 Mahogany (1521) and Early Victorian furniture (1493) now carry the lowest of all AFI index figures.

One positive from the 2015 AFI, Andrews noted, is that the indices "have reached a point where they are so low that reassessment and revitalisation may soon take place".

The web is proving an effective medium for dealers to meet the collector, furnisher and decorator. Andrews believes the fall would have been greater if internet technology and its effect on buying had not intervened.

"The retail emphasis seems to be veering towards the internet-oriented dealer who is alert to current domestic conditions and takes the initiative in website design. Antiques may be out of furnishing fashion but the internet is making it easier to buy them."

A full analysis of the AFI numbers is published in the February edition of ACC's Antique Collecting magazine.