Art & Antiques for Everyone will make a return to the NEC Birmingham for the first time since November 2019 when it became the first major regional UK fair to be cancelled following the Coronavirus outbreak.

During the pandemic, organiser Mad Events (Dan Leyland and Marisa Beckman) took the opportunity to simplify the event’s existing vetting rules and procedures, with the aim of opening the fair further to new exhibitors following a pricing policy change in 2019, which had been successful in attracting new dealers.

This year a number of fresh faces have signed up including Rug Addiction, Slade’s Antiques, Not Wanted on Voyage and Freya Mitton.

The first three are regular dealers at provincial fairs, while Mitton is a regular at a number of the higher-end events including Olympia in London.

This event is the fourth AAfE fair for the organisers, who note that the mix and range of dealers is part of the charm of the fair with items ranging from £10 to over £100,000.

Running from November 25-28, it remains one of the largest indoor antiques and interior fairs outside London. It expects to have around 150 exhibitors (in line with previous years) stalling out at the end of the month. Like many other events, AAfE has had to make some adjustments to ensure that the event will be Covid-safe. These include the NEC checking visitor Covid passes and, unfortunately, there will be no speakers at the event on this occasion. However, alongside the exhibitors will be a loan display of Spode ceramics staged by the Spode Society that had been due to take place last year when the event was cancelled.

Better late than never, this comprises approximately 170 examples of the finest and rarest pieces. Leyland said: “I am delighted that the Spode Society has chosen our event to present such a prestigious and important display.”

This is the only dedicated exhibition that has been organised by the society and several dealers at the fair will be offering Spode pieces with the knowledge that enthusiasts will be attending to see the exhibition.

AAfE is a well-known hotspot for pottery and ceramics dealers and one of the regulars, Chester’s Farm Antiques, will be exhibiting with a faience plate, painted, signed and dated 1877 by Catherine Sparkes (1842-1910), priced at £675.

Other decorative pieces on offer include a sterling silver cigarette box from Mark Goodger Antiques for £1995 and an almost complete 19th century homeopathical medical case available for £595 from Mike Melody Antiques. 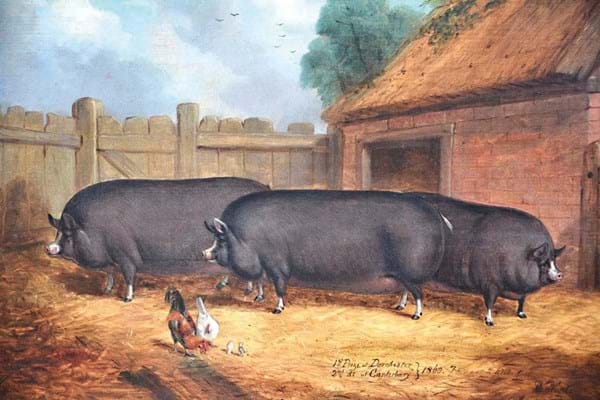