Over the years, there has been much speculation about the identity of the young aristocratic woman whose mid-16th century portrait was the unexpected top seller at Beurret, Bailly & Widmer (20% buyer’s premium) on March 24 in Basel.

The extravagant costume, the costly head-covering with an ostrich feather and the hairnet, beset with pearls, all denote the courtly status of the sitter, but just who she was remains a mystery.

For a long time it was equally unclear whether the Bildnis einer jungen Frau (Portrait of a Young Woman) was the work of Lucas Cranach or of his identically named son. According to current research, the attribution to Lucas Cranach the Younger is more secure.

While the SFr2.1m result for Antony van Dyck’s Saint Jerome in the Wilderness (see ATG No 2489) was by far and away the highest price at Koller’s (25/22/15% buyer’s premium) painting sale on March 26 in Zurich, several other notable results were achieved. The biggest surprise was the bidding match that ensued when the Portrait of a Young Boy in a Lace Collar came up for sale. The 16 x 13 (40 x 33cm) canvas from a Swiss collection was attributed to the Circle of Annibale Carracci and estimated accordingly at SFr4000-6000. There was obviously more to the painting that the auction house had anticipated: the unnamed buyer was taken to SFr185,000 (£146,825) by more than a handful of international competitors. Considerable interest also came for 7in (18cm) tondo of a Reclining Cow in a Landscape by Roelant Savery, who was renowned for his landscapes with animals, his floral still-lifes and in particular for his numerous depictions of a dodo.

The tondo was dated 1604 and was originally one of a pair; the whereabouts of its counterpart Water Birds in the Reeds, which was last on the market in 1988, is currently unknown. Koller’s starting price was SFr35,000; the winning bid of the new owner, a German collector, was SFr105,000 (£83,335).

Since it was auctioned in Milan in 1932, accompanied by a similar painting of St Maurus, a late 15th century St Benedict, tempera on wood, has belonged to a European collection, where it was only recently rediscovered.

The 2ft 1in x 9in (63 x 23cm) panel can be attributed to the Florentine painter Filippino Lippi, son of Fra Filippo Lippi and long-time collaborator of Sandro Botticelli.

On the other hand, the auction house had no luck with the Portrait of a Gentleman by Titian, which was last on public display in 1939, when it was shown at exhibitions in New York and San Francisco. No one was willing to pay the SFr800,000-1.2m that Koller was hoping to realise. Worthy of note in the sale of 19th paintings which followed the Old Masters was the result for a vibrant View of Capri by Konstantin Ivanovich Gorbatoff.

After leaving St Petersburg in 1922, Gorbatoff spent four years in Capri, before moving to Berlin, where he lived until his death in 1945. There were more potential phone bidders than available phonelines when a 17th century St Jerome with a Skull, came up at a recent sale at Karrenbauer (24% buyer’s premium) in Constance, Switzerland.

The auction house provided no information to its provenance, but that did nothing to deter the numerous bidders, many of them Italian, who were attracted by the quality of the vanitas composition and the moderate reserve of €400. Bidders from all over the world took little notice of the restrained guide of SFr1500-2500 for an early 17th century depiction of Adam and Eve, which was offered at Schuler (23/20/16% buyer’s premium) in Zurich on March 26, the final day of a three-day auction.

The 2ft x 19in (60 x 48 cm) canvas had suffered somewhat over the years, having been cut and mounted on plywood. It was catalogued as “in the style of Bartholomeus Spranger”, a Flemish artist, who became court painter to Emperor Rudolf II in 1581 and remained in Prague until his death in 1611.

Bidding was frenetic and prolonged, ending only when an international bidder on the phone saw off his competitors at SFr110,000 (£86,680).

There was also substantial interest for Felix Vallotton’s late landscape, La Dordogne à Vitrac (ATG No 2482), painted in 1925, only six months before his death. 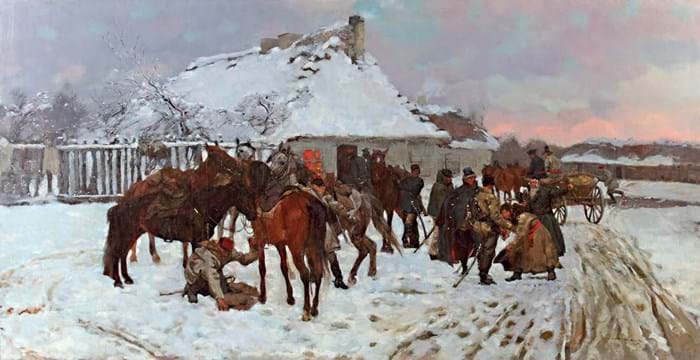 A collection of 19 paintings by 19th century Polish artists, who belonged to the Munich school, generated strong demand from bidders when they came under the hammer at Yves Siebers (25% buyer’s premium) in Stuttgart on March 24-26.

They came from a member of a family of German textile merchants who moved from south Germany to Lodz in the 1930s, and were now consigned by his descendants. Every painting found a buyer, many of them for multiples of the guides.

A German collector had his work cut out to secure the top lot: Józef Marian Chelmonski’s 2ft 1in x 4ft (64cm x 1.23m) Soldiers at Rest, painted in 1885, while the artist was in Paris. The surprising high point of the sale at Schmidt (24% buyer’s premium) in Dresden on March 20 was a Still Life with Fruit and Heart.

It was painted by the German artist Wilhelm Dodel, who was a pupil of Otto Dix and a representative of the Neue Sachlichkeit (New Objectivity) style.

A moebius strip at the centre of the composition is covered with musical notes and the German words for sincerity, prosperity and contentment (Aufrichtigkeit/Wohlstand/ Zufriedenheit), which is presumably what Dodel wished for his sister, Regina – to whom the 10 x 14in (25 x 35cm) oil is dedicated.

Three years previously, she had married Dodel’s fellow artist Kurt Querner. Regina Querner kept the painting until 1968, when she sold it to the consignor.

Wilhelm Dodel’s background was rather unusual. He was born in Moscow of German parents but moved to Dresden in 1918, where he trained as a painter. As a member of the German Communist Party, he had several run-ins with the Nazis and as a consequence was sent to the front in 1939. He was later transferred to occupied Russia to work as an interpreter and died there in 1944.

Dodel’s works rarely make it to the market; many of them were destroyed in the bombing of Dresden. The asking price for the still-life was a moderate €2200 and two German collectors fought long and hard for it until the hammer fell at €40,000 (£34,480).