Our selection of 20 objects to view and buy from dealers online. This striking pair of figural candlesticks was made by silversmith Edward Farrell of London, 1823, for the Duke of York. Standing 12in (29cm) high, they are priced at £165,000 in Koopman’s online catalogue Illumination in Isolation. Offered for £2750, this set of Japanese playing cards, c.1840, was made for the game karuta based on the anthology Ogura Hyakunin Isshu (‘100 poets, one poem each’). Comprising 200 cards, the set includes Yomifunda or ‘reading cards’ each illustrated with a sketch of a poet and complete poem and corresponding Torifuda or ‘grabbing cards’, which have just the end of the poem. In the game, one player reads out a poem and the others must identify the card with the corresponding picture. Aaron Antiques features this 1777 powder horn on its YouTube channel Antiques Man. Made during the American War of Independence by evident loyalist Adam Starbuck, it includes a crest for George III and is inscribed A Pox on all Rebels. There is also a detailed map of the Hudson River. It is offered for £12,000. Mervyn Peake (1911-68) depicted Vivien Leigh playing Blanche Dubois in the 1951 film A Streetcar Named Desire. The artist was friendly with the actress and around this time tried to convince her (ultimately in vain) to act in and produce one of his plays. The oil on board from measures 11½ x 8in (29 x 20cm) and is offered framed and glazed for £6500. This Victorian rosewood side table, c.1870, with tripod feet and a pillar base is offered for £460. A tiny coppersmith barbet leans from the branch of a starfruit tree in this 18th century watercolour from the Impey Album. The collection of paintings was commissioned by Elijah Impey and his wife, who employed three Patna artists to depict the animals in their Calcutta menagerie, and the work in question was completed by Zain al-Din. It is available for £175,000. In the 1920s, Patek Philippe sold more pocket watches in South America than in any other continent. A pair of retailers, Carlos Gondolo and Paulo Labouriau, founders of the ‘Gondolo gang’, apparently accounted for a third of worldwide sales. They ordered bespoke watches with modifications only available in the Patek Philippe Chronometro Gondolo model. These watches were awarded as prizes in weekly lotteries for their gentlemen’s ‘gang’. This large model is available for £7995. 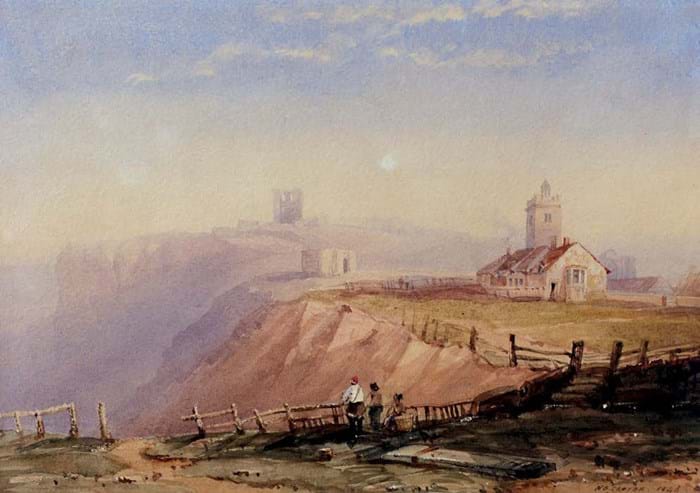 Among the Yorkshire watercolours dealer Derek Newman had planned to bring to the now cancelled Pavilions of Harrogate Fair was this 1846 painting by Henry Barlow Carter (1803-67). It shows the marine and landscape artist’s adopted home of Scarborough and is offered for £1250. This Victorian leather jewellery box by W&J Milne, c.1875, is offered through The Old Cinema for £550. The interior has two fitted trays and is lined with original red velvet. This ceramic figure, Bantang, c.1933, by Clelia Bertetti, depicts an Indonesian boy playing a sitar. Featuring contrasting matt and gloss glazes, it is offered for £2200.

This White Star album was produced in 1898 to commemorate the naval review that took place on Queen Victoria’s Diamond Jubilee. Photographed, engraved and printed by Stas, Walery and Company, it was produced for private circulation. The album, offered for £7500, is particularly notable for an inscription from the founder of the line, Thomas Ismay, to Thomas Andrews, designer of the later doomed vessel Titanic. The original version of Colonel Mordaunt’s Cock Match at Lucknow painted by Joseph Zoffany (1733-1810) is now at Tate Britain. However, this hand-coloured etching of the scene by Richard Earlom (1743-1822) is available for £3600 through the London Original Print Fair website.

The crowded scene, which features notable figures of the day from England and India, was recorded during Zoffany’s journey to the subcontinent in the 1780s. This gilt bronze Argand or Colza chandelier, similar to an example in the staircase hall at Arlington Court in Devon, is priced at £14,500. The style was popular in the 1820s, before gas and electricity, but it is now fully wired. This 1930s Art Deco bronzed metal table light, 16½in (42cm) wide, depicts an Egyptian girl holding a glass ball. Set on a marble base, it has an arched glass shade and is offered for £395. ‘A Collection of Flowers Classified According to Natural Orders’ compiled by Elsie T Skinner, £350 from Alembic Rare Books.

Compiled by Elsie T Skinner of St Katharine's College, Tottenham, this herbarium was probably made as an advanced student project. A Collection of Flowers Classified According to Natural Orders contains 151 mounted specimens representing 121 species from around the UK, labelled with their scientific and common names. It is offered for £350. A complete run of the ‘Picture Post’ magazine, £2000 from Thomas Jackson.

Picture Post ran from 1938-57 and helped define photojournalism in Britain. A complete run of the magazine is offered by dealer Thomas Jackson for £2000. The design and ornament of this 5ft (1.52m) Regency period mahogany hall settee reflect the style popularised by Thomas Hope in his Household Furniture and Interior Decoration, 1807. It was very likely to have been made by the Marsh & Tatham partnership c.1815. It comes for sale from a New York private collection with a price tag of £25,900.