Extensive collection of books and other material comes to auction from rare book shop duo. Running to 36 lots in all, an extensive Rudyard Kipling collection of books and other related material offered in a recent New York sale produced excellent results and record bids.

Part of an April 15 sale held by Doyle (25/20/12.5% buyer’s premium), they came from the personal collections of the late Joan Twigg, who, along with her husband Oliver, had run the Totteridge Rare Book Shop.

Not in the best of conditions but sold at $4250 (£3400), the earliest item was a copy, once in John Pierpont Morgan’s library, of Echoes. This was a Civil and Military Gazette Press of Lahore publication whose two un-named writers were Rudyard and his sister Alice, or ‘Trix’.

Dated 1884 on the original but rebacked printed wrappers, this 72pp work contains 39 poems – mostly ‘echoes’ or imitations of the work of well-known poets. All bar seven of them have been ascribed to Rudyard.

A copy that was additionally inscribed with a poem in his hand is the only example to have made more at auction – sold for £4800 at Sotheby’s in 1999. Quartette, an 1885 Kipling family collaboration in which Rudyard’s tale of ‘The Phantom Rickshaw’ made its debut. Sold for a record $4250 (£3400) at Doyle.

Quartette, subtitled ‘The Christmas Annual of the Civil & Military Gazette’ and printed in Lahore in 1885, was another Kipling family production.

The four ‘Anglo-Indian Writers’ noted as contributors on the extended subtitle were Kipling, his father, mother and, once again, his sister.

The key work is Rudyard’s tale of ‘The Phantom Rickshaw’, an often reprinted tale that was here making its first appearance. In printed paper wrappers designed at the local Mayo School of Art, this appears to be the first copy seen at auction since the 1990s and it made a record $4250 (£3400).

The wrappers, in the form of an envelope whose front cover serves as the title-page, showed some worming and there were other defects of condition, but only one other copy has made more at auction.

In 1990, at Sotheby’s New York, a copy inscribed by its author to a Mrs Money and later owned by Jerome Kern was bid to $7000 (then £4270) in one of its many sales of books from the vast Bradley Martin library. 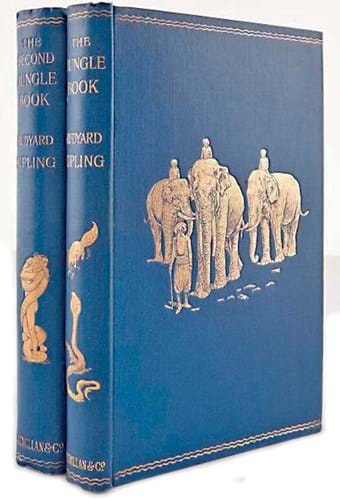 A pair of 1894-95 firsts of the two Jungle Books, both of which include illustrations by Rudyard’s father, sold for a much higher than expected and record $14,000 (£11,000). Both were in exceptionally fine condition and the second volume also retained a frayed and soiled dust jacket.

Yet another record was broken, at $9000 (£7200), with the appearance of a 1902 first issue of Kipling’s Just So Stories – a work for which he provided his own illustrations.

The jacket showed some losses and defects, but it is rarely seen at all and, as an added attraction, one of the two bookplates in this copy was designed for its then owner by a distinguished American artist and illustrator, Rockwell Kent.

Sold at $6000 (£4800), yet another auction record, was a 1903 Macmillan first of Sixteen Illustrations of Subjects from Kipling’s “Jungle Book”, a portfolio featuring the splendid early work of the Detmold brothers, Maurice and Edward.

Collected by an anarchist and a librarian