Napoleon: his majesty and tragedy depicted

Napoleon Bonaparte’s magnetism remains as forceful as ever in UK salerooms. 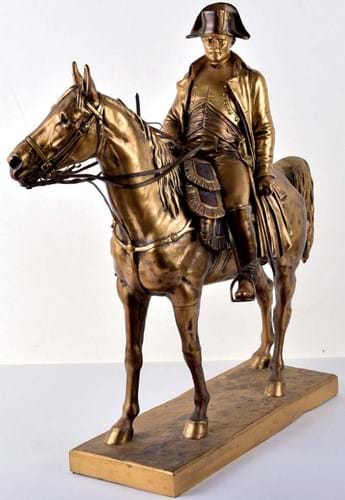 Making an imperious entry among the medals, weapons and uniforms at the C&T (20% buyer’s premium) specialist militaria sale at Tunbridge Wells on February 4 was a bronze of the emperor riding his horse Marengo.

Signed to the base Morise for Louis- Marie Morise (1818-83) and struck with the foundry seal Bronze Garanti Au Titre. Paris, it attracted interest from the UK and the Continent at the Kent sale. A less triumphant image of Napoleon outstripped all expectations at the Truro rooms of Lodge & Thomas (15% buyer’s premium) on February 14. It was a copy of the well-known watercolour sketch showing the emperor seated on a cannon on the deck of HMS Northumberland carrying him into final exile on St Helena.

The original sketch was by Captain Denzil Ibbetson who accompanied Napoleon to the island and became his friend. An etching of Ibbetson’s watercolour of Napoleon on his deathbed is in the British Museum.

The 6¾ x 5in (17.5 x 13cm) Cornish offering, although a copy, appeared to be an early work, possibly from the first quarter of the 19th century. This undoubtedly boosted interest well beyond the £40-60 estimate fixed by the trade vendor.

Offered with an 18th century etching of a military camp and warships off Gibraltar, it sold to another dealer at £1500 bidding on thesaleroom.com.