Claymores (the word comes from the Scottish Gaelic claidheamh-mor meaning ‘great sword’) were the weapon of choice in the ongoing warfare between Highland clans and border skirmishes with the English from c.1400-1700. 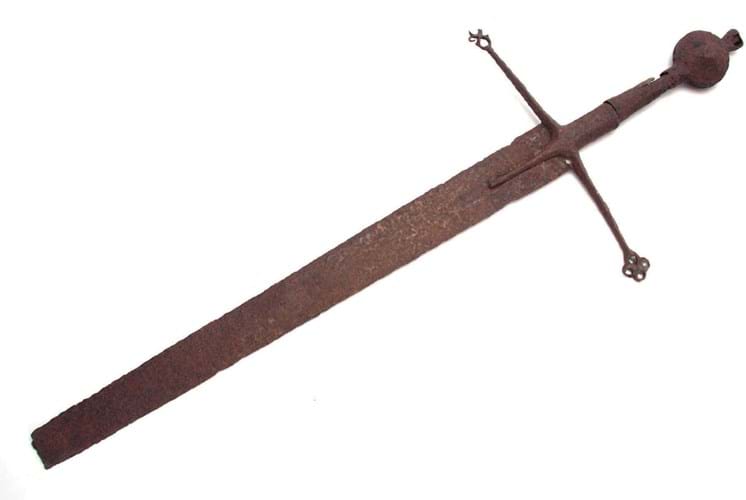 The Scottish Highland sword or claymore sold for £30,000 at Hutchinson Scott.

They follow a largely uniform design, set with a wheel pommel capped by a crescent-shaped nut and a guard with straight, often sloping, arms ending in quatrefoils.

The last known battle in which such weapons were used in any significant number was Killiecrankie in 1689 – a qualified victory for the first Jacobite rebels against the forces of the new Williamite government.

Publications such as James Drummond’s 1881 Ancient Scottish Weapons did much to popularise the collecting of Highlands weaponry. Victorian and later copies are not uncommon but only very few genuine 15th or 16th century Scottish swords survive. Those that do are displayed in ancestral collections or major museums and are rarely available to commerce.

Hence the great interest in a rusting relic, with a section of the blade missing, that came for sale at Hutchinson Scott on January 16. It was consigned with little provenance (it had been kept in the garage of the vendor who was unaware of its significance) but its pitted condition was akin to an object that had been buried, submerged or exposed to the elements for many years. A details of the Scottish Highland sword or claymore that sold for £30,000 at Hutchinson Scott.

The winning bidder was a dealer from London who was purchasing the weapon for a client. The sword was of particular interest for its early date and an unusual single-handed grip – making it one of only three or four known.

While the price for this relic was undeniably high, it can be judged against the £200,000 bid at Thomas Del Mar in 2007 for the one well-preserved period claymore to appear on the market in living memory.

That 16th century example, measuring its full 3ft 2in (97cm) long, was deaccessioned from the collection at Warwick Castle.