A trio of exhibitors at London’s rare book fair 'Firsts' ponder the market, their motivations – plus flooded shops and heavy metal. “There has definitely been a flight to quality. It seems to be much easier to sell a book for five figures than three.” James Hallgate, proprietor of Lucius Books in York, ponders the rare book trade in its post-internet guise.

“The search engine has made books that were previously deemed rare now not really scarce at all. You can find five or six copies of a ‘rare’ book so now to stand out it has to be exceptional. The market has become more sophisticated and it is to the benefit of most of us if people are buying great things – but obviously that creates a problem of finding them.”

The dealer has become used to tackling ebbs and flows since he launched his business in the early 1990s – first as an occasional trader at London books fairs, then as a dealer through antiques centres and latterly as shop owner on the ancient York street of Fossgate.

A nadir was the flood which hit the city in 2015. On Boxing Day “the shop front was fine but when I looked through I could see objects floating in the back room”, Hallgate recalls. “We did save about 80% of our stock but in the lower two rooms were the majority of our manuscripts. That was probably the worst thing – they were unique, irreplaceable items.” A temporary stay in offices a few miles outside the city centre turned out to be a few years, but fast forward to 2019 and Hallgate is settled once more in old York – this time at the top of Micklegate, a long way above the river. Nearby is Ken Spelman Rare Books, run by Tony Fothergill who is also manager of the PBFA York National Book Fair. “York has really bucked the national trend of bookshops closing,” says Hallgate. “It has always supported five or six good rare book dealers and we all do things differently. I think we all feed off each other – I certainly wouldn’t want to be the only bookshop here.”

Lucius specialises in detective fiction and children’s books, particularly signed and association copies and manuscripts – “books and objects we can actually place in that author’s hands and trace their provenance to now”. A more recent focus has been youth and pop culture – material that “wasn’t deemed that interesting or collected 10 years ago”.

York has really bucked the trend of bookshops closing. I think we all feed off each other

He looks forward to Firsts. “It is a concentration of very big customers and is a great opportunity to meet people you wouldn’t necessarily have come across by any other means. Some we already know and have dealt with online but it is always great to make personal contact.

“You get the chance to display your best stock in a way that suits you. Quite often people don’t actually know what they are looking for until they are presented with it.” “Millennials will be the saviours of the book trade. There has been a missing generation – my generation – that remains relatively quiet in the market. But the millennials are different. We have no problem finding new people.”

As Peter Harrington Rare Books, the firm his father started in 1969 marks its 50th anniversary, Pom Harrington is permitted a little nostalgia. But he is also fixed on the future. “We have been seeing a gradual decline in the attendance at all book fairs. The fairs that seem to get the best response from the public are those that are offering something slightly different.

“The key challenge today is how do we get the new generation of buyers who have bought from the internet to come away from the screen and come and see the book first hand in the marketplace.”

The current chairman of the Firsts fair has been a driving force behind some of the newer initiatives surrounding London’s premier book fair – the move from Olympia to Battersea, this year’s promotional tie-up with Shakespeare’s Globe and the bringing together of four events into a single week.

“I felt strongly that this should be the case. For the most part the reaction has been very positive.”

Peter Harrington issued his first catalogue in 1969 from a stall at Chelsea Antiques Market on King’s Road. By 1971, he had joined forces with brother Adrian and formed Harrington Bros, the siblings operating in the decorative binding market (once selling the entire contents of their shop to a decorator furnishing a skyscraper in Houston). Pom Harrington joined the firm from school in 1994, working alongside his father until his death in 2003.

The company has evolved – organically rather than to any masterplan, says Harrington – from three staff in 1997 to now employ 40 people across two London shops (Fulham Road and Dover Street). It’s probably a little more corporate than his father would have liked – it has a financial director and an office manager – and the full embrace of technology would be anathema to a man who disliked computers.

Harrington describes the book trade as “completely transformed” by the internet search engine “and still in some ways coming to terms with it”.

He says online bargains are rare (with a little web research the owner of a rare volume can quite quickly establish its price level) and the days when books would move from one shop to another incrementally increasing in price are over.

Instead, as collectors seek to acquire the best examples, a great financial divide has opened between the ordinary copy and handful of survivors that come with dust jackets or presentation inscriptions. “It is like a gearing ratio” says Harrington, himself a collector of Roald Dahl and other children’s books. “A Great Gatsby first edition can be £2500. I heard that recently a good copy with a dust jacket was sold for £400,000.” Harrington’s own web presence is imposing. When the firm joined last year’s 550-strong dealer protest against Amazon-owned portal site Abe Books it really mattered. For a day it removed more than 16,000 volumes from the site including some of the priciest bibliographic treasures on the market today. “I know my father would have been staggered at some of the books that have passed through our hands in recent years.”

The firm’s 150th catalogue was produced to mark the golden anniversary featuring 50 prize books and manuscripts in the company’s current inventory. It begins with one of the ‘Noble Fragments’ of a Johann Gutenberg Bible (£97,500) and closes with a dedication copy of Harry Potter and the Goblet of Fire inscribed by ‘Jo’ to her friend Susan Sladden ‘who helped Harry out of his cupboard’ (£75,000).

Which of the 50 does Pom Harrington think his father would have appreciated most? Without hesitation he quickly volunteers a copy of William Blake’s 1797 The Complaint, and the Consolation, or Night Thoughts in contemporary colour (priced at £150,000 and since sold).

The market is ever evolving. What next? “Where the future will take us, who knows? But we will keep doing what we love — finding rare and interesting books and manuscripts, and, equally important, new collectors to look after them.” 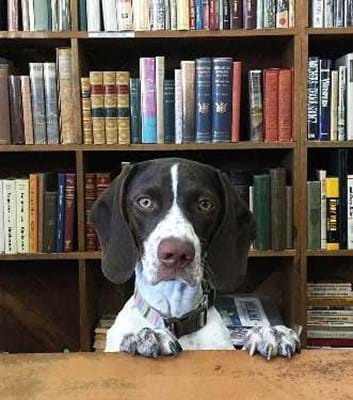 Firsts will be a true first for Johnson Rare Books & Archives – the first international fair for the husband-and-wife dealership from Covina, California.

“We would love to expand our clientele. We decided to jump in feet first.” Brad and Jen Johnson (no, not that Brad and Jen) met while working on John Kerry’s presidential campaign: he an employee of mentor Roger Gozdecki at Anthology Rare Books in Covina since the age of 15, she a newspaper reporter turned public relations executive. They later took over the shop from Gozdecki in October 2006 and continue to enjoy the benefits and face the challenges of a permanent trading base.

“The demands of the everyday book shop customer are far different than those of collectors. As such, we need to maintain a deep inventory at a variety of price points. If you don’t count our shop dog Elke, we are the only full-time employees. When we are away, you may find one of our siblings, parents, or even Brad’s 92-year-old grandmother at the front counter.

“The great advantage of having a physical shop is you never know what is going to walk through the front door. Recently, a scout brought in an exquisite example of the Black Sun Press edition of the Max Ernst-illustrated book Mr Knife, Miss Fork (1931).” It will make its debut at Firsts alongside a first American edition of Charles Darwin’s On the Origin of Species and an unpublished children’s story written and illustrated by William Neave Parker.

Archival material, vernacular photography and ephemera are an increasing focus of attention as the business nurtures relationships with various institutional clients.

The Johnsons have an unusual focus on heavy metal material. And, as the 50th anniversary of Black Sabbath’s self-titled first album approaches, why not? “It struck us as a glaring oversight that academia and the trade largely ignored heavy metal, especially given the attention now paid to punk and other genres.”

The couple spent two years assembling a research collection tracing the history of heavy metal, its antecedents, its various sub-genres, and cultural impact, that is now part of the Charles E Young Research Library at UCLA. A catalogue is currently in the making to mark metal’s golden jubilee next year. A Black Sun Press edition of the Max Ernst-illustrated book 'Mr Knife, Miss Fork' (1931), numbered 52 in original black cloth binding. It is priced at $9500 by Johnson Rare Books & Archives at the 'Firsts' fair.

It’s a reminder that the book trade in LA has, like many others, changed markedly in the past decade. “There are definitely fewer secondhand and antiquarian book shops in Los Angeles, which is sad even though it has been a plus for us as one of the few left standing. However, we still have several very strong regional book fairs that are well supported by the community.

Book fairs are important as open shops become fewer and fewer. They provide bibliophiles with a place for serendipity, and opportunity to see, handle, and appreciate a wide variety of material.”

Jen Johnson is the chair of the planning committee for the venerable California International Antiquarian Book Fair (February 7-9, 2020) while the couple are now producing their own fairs in the state.

The first, Rare Books LA, was held at the Pasadena Convention Center in February.

A second show, Rare Books LAX, is scheduled at The Proud Bird restaurant near Los Angeles International Airport on October 5-6.

In her own write: The way the market is changing for rare books by women authors