'La Biennale Paris' and 'Parcours des Mondes' bring the dealing scene in the French capital back to life after summer slumbers, while auction houses also rise to the occasion. We take an early glimpse at what will be on offer for the visitor in September. Long one of the lynchpins of the Paris season, the Biennale is the showcase event for France’s national antiques dealers’ association, the Syndicat National des Antiquaires (SNA).

The fair started back in 1956 and was originally staged every other year, but the SNA made the decision to go annual from 2017. This year will be the 31st edition and will take place at the Grand Palais where it has been held for the lion’s share of its long run. The organising committee is for the third year running headed by Christopher Forbes.

The 2019 Biennale will be staged from September 13-17 which is later than last year and with a shorter run of five public opening days as opposed to nine previously. This moves the fair away from the summer break and aims to benefit visitors in what is a crowded international fairs calendar. A new layout for stands will include, at the exhibitors’ request, smaller spaces to allow a greater diversity of exhibitor. Imperial Art, a Paris dealership established in 2016 specialising in works from the Empire period, is one of the exhibitors in the New Talents section of the Biennale this year. Among the pieces that the gallery will be taking to the event is this 8in (20cm) wide Sèvres two-handled footed coupe à bouillon from 1809, delivered to the Tuileries in that year then offered by Napoleon as a New Year’s gift.

Also new this year is a section for young dealers, something which is already a feature of several other major fairs. A dozen dealers who have been established for fewer than 10 years will be grouped together in a ‘New Talents’ section.

Non-Parisian ‘New Talents’ in the section are: Villa Rosemaine from Toulon (costume and textiles); Maison Riondet of Lyon (jewellery and watches); Igra Lignum from Dompierre (antique furniture and works of art) and Galerie Schifferli of Geneva (Surrealist and Modern painting and works on paper).

The special exhibition this year will be given over to two displays of art and artefacts from Bahrain, which is the guest of honour for this year’s fair. 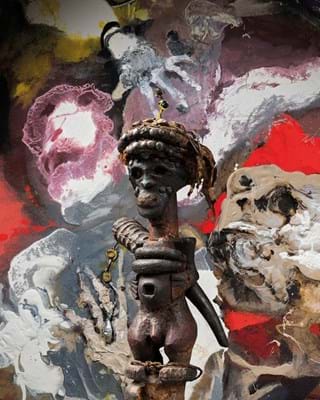 One of the eagerly awaited events on the Paris Left Bank scene every September is the gallery-based tribal art event Parcours des Mondes.

Now celebrating its 18th edition, 64 specialist dealers will be gathering in the streets around Saint-Germain-des-Prés for six days from September 10-15. The majority are presenting a selection of ethnographic artefacts from Africa, Oceania and the Americas, but they are augmented by a selection of dealers showing Asian art and antiquities.

While many are Paris dealers with galleries in this area, others come from Australia, the US and other European countries keen to take part in an international showcase which attracts an equally worldwide following of serious collectors.

Many of the galleries put together special themed shows for this event featuring either single-owner collections or a focus on one particular area, including pieces they have been gathering together for some time and setting aside for the event.

Several of these have already been announced, although more are likely to be finalised between now and the opening.

They include a display devoted to the art of the Yoruba peoples of Africa covering what is now Nigeria and beyond put together by the Brussels dealer Serge Schoffel.

The Galerie Abla and Alain Lecomte will be showing a private collection of sacred masks from west and central Africa and Galerie Flak shows examples of the art of New Ireland in the Bismarck Archipelago.

Galerie Dodier from France will be focusing attention on wild animals (buffalo, hyena, chameleon and crocodile) courtesy of a selection of 15 large masks mostly hailing from west Africa.

Among the Asian specialists, Mingei Japanese Arts presents a selection of bamboo wickerwork by some of the most renowned masters in a field that was recently the subject of an exhibition at the Musée de Quai Branly titled Splitting the Air. The Millon sale at Drouot on September 18 of the pre-Columbian collection of Manichek and Jean Aurance includes this figure of the Aztec goddess Chalchiuhtlicue from Mexico in carved and polished volcanic stone dating to the period 1350-1521. It will have an estimate of €40,000-60,000. Image copyright: Millon/Drouot.

The long-standing presence of the Parcours des Mondes in the Paris September calendar means it is also an optimum time for the city’s auction houses to stage sales or viewings of tribal art.

One early announcement is the sale at Drouot on September 18 of the pre-Columbian collection of Manichek and Jean Aurance.

They purchased their first piece in 1963 from the dealer Olivier le Corneur and went on to assemble a collection that was housed in an Art Deco lakeside home in Vésinet. They made a point of preserving pieces in their original unrestored state.

Pictured above is one of the highlights of the auction which will be held by Millon: a 12½in (32cm) high figure of the Aztec goddess Chalchiuhtlicue from Mexico in carved and polished volcanic stone dating to the period 1350-1521. It will have an estimate of €40,000-60,000.

Dealer serves up a loan to tea exhibition