Aldridges of Bath smashed its house record last week with the sale of a Yongzheng mark and period bowl for £220,000 (plus 20% buyer’s premium). It had come for sale following a routine house call. 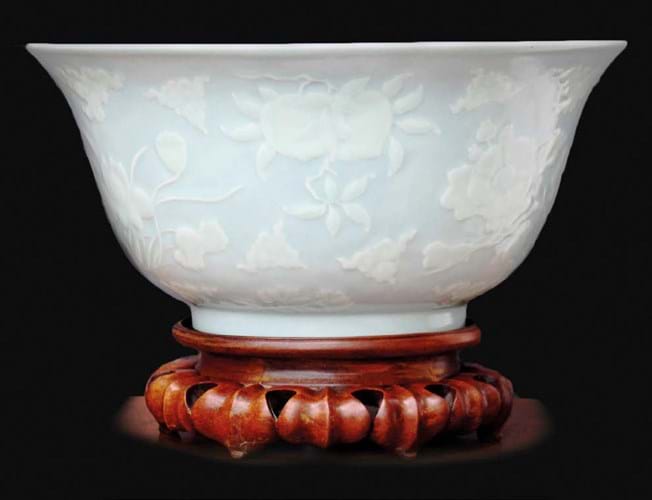 The 13½in (34cm) ‘flowers and fruit’ bowl is part of a group of Yongzheng (1723-35) celadon-glazed bowls of this impressive size, each moulded and carved with peony, lotus and rose blossom and sprays of peach, pomegranate and persimmon, the ‘three abundances’ or suando motif.

Perhaps half-a-dozen examples have been sold in the past two decades. Another, by descent from the collection of Geoffrey Cunliffe (brother of Lord Cunliffe, the well-known British collector of Chinese ceramics), appeared for sale at Bonhams Hong Kong in late May. It made HK1.1m (£110,000) plus premium.

The bowl found by auctioneer Ivan Street in a property just outside Bath had been bequeathed in 1959 to the owner by her godmother, Miss Vera Crossman of Hans Crescent, Knightsbridge.

As a regular client of nearby Harrods it is thought she bought it (together with its later hardwood stand) from the department store in the immediate post-war years.

Offered as the final lot of Aldridges’ July 30 sale with an estimate of £20,000-30,000, it attracted six parties who had paid the necessary deposit to bid. Following a five-minute exchange it sold to a UK agent, relaying the bids of his client in China, at £220,000.

“My career has peaked. It’s downhill all the way now,” joked Street.

The previous house record at Aldridges was £50,000 for a pair of emerald Art Deco earrings.

The very next day, on July 31, another item of Chinese porcelain caused high drama at the small Suffolk saleroom of Diamond Mills when a Chinese vase, estimated at just £100-150 sold in the room at £200,000.