A silver hunting flask taken from the Summer Palace when it was sacked by British troops in 1860 during the Second Opium War, which was due to be auctioned tomorrow (July 6), has now been withdrawn. 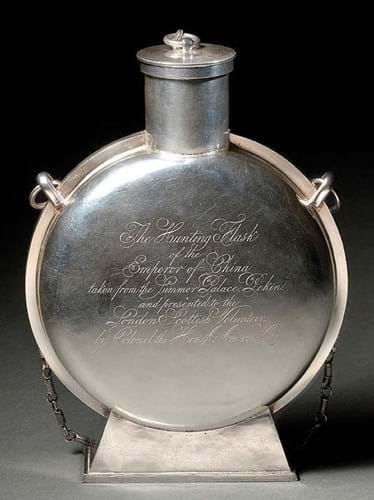 Following a letter sent by the office of Yuanming Yuan (The Old Summer Palace) in Beijing to Alastair Gibson Auctions and a subsequent meeting, the flask will no longer be auctioned publicly.

Gibson said he is “sympathetic to the Chinese government position on cultural objects taken from the Yuanming Yuan” (The Old Summer Palace) and has now taken the “decision to withdraw the flask from auction”.

But he could not comment on whether the flask would be sold privately in future.

As described in ATG No 2541, the flask, also known as the ‘Anson Cup’, includes two inscriptions. One in Chinese characters to the foot reads Xianfeng urh men (the second year of Xianfeng for 1852) and the other in English reads The Hunting Flask of the Emperor of China taken from the Summer Palace, Pekin and presented to the London Scottish Volunteers By Colonel the Hon A Anson VC.

It was gifted to the London Scottish Volunteers by Colonel Archibald Augustus Anson (1835-77) who served with the regiment between 1867-73. The flask was subsequently used as a shooting prize.

Anson, the third son of the 1st Earl of Litchfield, was a career soldier. Present at the sacking of the Summer Palace, one of Anson’s tasks was to organise the auction of seized objects with the money shared among the troops.

The flask is dated to the second year of the Emperor Xianfeng in 1852.

The emperor married Ci’an in 1852 and Gibson believes it is possible that this flask was made for the celebration of the wedding.