A late work by Roy Lichtenstein topped the bill at Christie’s first ‘relay-style’ auction. The sale involved four auctioneers in different countries each conducting a section of the sale with the venues linked-up together via live streaming. Adrien Meyer, Christie’s global head of private sales and co-chairman of Impressionist & Modern Art, on the rostrum in New York for Christie’s ‘One’ auction.

It began in Hong Kong with Elaine Kwok of Christie’s Asia on the rostrum, before moving to Paris where Cécile Verdier conducted proceedings. It then moved to London where Jussi Pylkkänen hosted the third stage of the event and then the baton was passed finally to Adrien Meyer in New York. With each auctioneer working in their local currency, the auction took four hours to complete in all.

Although some bidders were able to attend in rooms themselves (Christie’s said all social distancing and locally required conditions were observed including temperature checks and health declaration forms in Hong Kong), bidding came primarily on the phone and internet.

The final total was $420.9m (£334.9m) including premium with 75 of the 80 lots sold (94%). Almost half the lots in the sale carried a guarantee from either the auction house or a third party, meaning they were always bound to sell at the sale in any case. The sale on July 10 was branded as a groundbreaking new concept for a global live auction of Modern and Contemporary art. Titled ‘One: a Global Sale of the 20th Century’, Christie’s reported large numbers of people tuning in online to watch ‘the new theatre’ unfold – a total of more than 80,000 people with 60,000 of those accessing the auction through social media in Asia.

The sale followed Sotheby’s $363.2m (£293m) auction the week before which was also an internationally streamed live event, although in that case the firm’s worldwide salerooms fed through bids to a single auctioneer in London.

As with the Sotheby’s sale, Christie’s ‘One’ auction generated some significant sales which suggested that the top-end of the art market remains afloat despite the worldwide lockdowns and economic effects of the coronavirus pandemic. These included 13 individual artist’s records as well as the Lichtenstein and a number of other top lots.

Christie’s chief executive officer Guillaume Cerutti: “Despite a challenging economic environment, the demand for works of art of great quality remains very strong; the market is more global than ever.” He added: “Innovation and adaptability is key – our clients have embraced our creative presentation and sale format combining live and online experiences.”

However, the overall amount raised at the ‘One’ auction, combined with the accompanying $30.9m day sale, represented under half of the $1.07bn (£830.2m) total from Christie’s New York sales in the same category in May 2019. 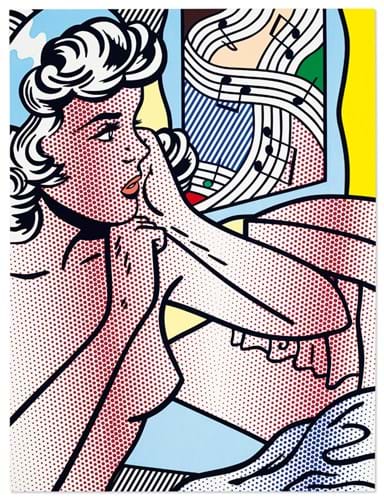 The highest price at the ‘One’ sale came for Nude with Joyous Painting by Roy Lichtenstein (1923-1997), a late work from 1994 which was offered in the New York section of the sale. It was painted in the artist’s trademark ‘Ben-Day’ dot style and was described as “the most important example of Lichtenstein’s last great series of nudes to have ever appeared at auction” by Ana Maria Celis, Christie’s head of post-War and Contemporary Art evening sales.

Offered with an estimate ‘on request’ (believed to be in excess of $30m), it was one of the lots with a third-party guarantee and, after a decent bidding battle, it was knocked down at $40.5m (£32.2m). Leading the London section of the auction was René Magritte’s L’Arc de Triomphe, a 4ft 3in x 5ft 4in (130.6 x 162 cm) painting from 1962. Depicting a tree in front of a wall of foilage, the subject was a familiar motif in the artist’s post-war oeuvre but, in terms of size, the picture was one of only a handful of Magritte paintings on this scale that remain in private hands.