A very early and delicate Böttger Stoneware covered bottle vase featured in the Important Meissen Porcelain from a Private Collection auction at Bonhams in London sold for a hammer price of £105,000. 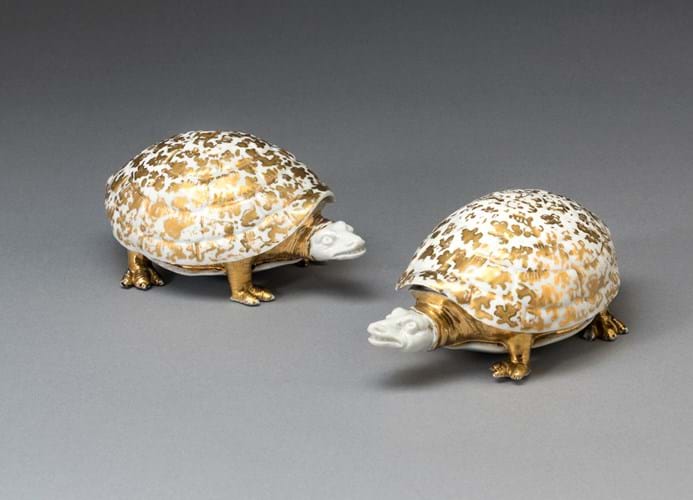 Among the other stand-out lots, an extremely rare pair of tortoise boxes and covers in excellent condition were estimated at £25,000-35,000.

According to Bonhams, they are described in the factory archives as ‘butterboxes shaped as tortoises’, and there is only one known comparable example which was in the collection of the Grand Dukes of Tuscany, and is now kept in their former home, the Palazzo Pitti in Florence. The banners on the sides of the cartouche on this tankard bearing the Electoral crossed swords of Saxony and the Polish Eagle, respectively, suggest – together with the exceptional quality of the decoration – that it may have been made for a member of the court or as a gift from the Elector. Bonhams said it was a “small, elegant piece and exceedingly rare; no other has come to auction in 30 years”. The gold decoration was probably applied in the Funcke Workshop in Dresden. The Dresden court-goldsmith Georg Funcke decorated porcelain of the Meissen manufactory from 1713 and worked in enamel colours as well as silver and gold.