ATG’s selection of hammer highlights over the past week includes a pair of Sèvres cups and saucers and Egyptian faience shabti figures. A pair of Sèvres cups and saucers sold for £3600 at Woolley & Wallis. Modelled with a tilted head, it was inset with abalone shell eyes and dates from the 19th century.

The Maori people in New Zealand carved such pendants from jade and, more rarely, in whale bone to be worn around the neck. The figure represents Tiki – the first man and the equivalent of Adam in the Christian world. One of two 5in (13cm) high Egyptian faience shabti figures that sold at £3900 at Hansons at its Teddington saleroom.

These two 5in (13cm) high Egyptian faience shabti figures with painted details and hieroglyphic panels sold £3900 - many time the £200-300 estimate - at Hansons at its Teddington saleroom on February 14.

They were part of the collection of the late Peter Newall, a maritime historian and author whose whose home in Blandford Forum, Dorset housed a vast collection of maritime books, photographs, postcards and other memorabilia. The winning bid for these two antiquities came via the-saleroom.com.

3. A pair of Sèvres cups and saucers A pair of Sèvres cups and saucers sold for £3600 at Woolley & Wallis.

This pair of Sèvres cups and saucers painted with garlands of flowers on a green ground sold for an unexpected £3600 at Woolley & Wallis of Salisbury on February 19.

Estimated at £200-300, they had some wear to the decoration but probably date from c.1760. The winning bid came via the-saleroom.com. 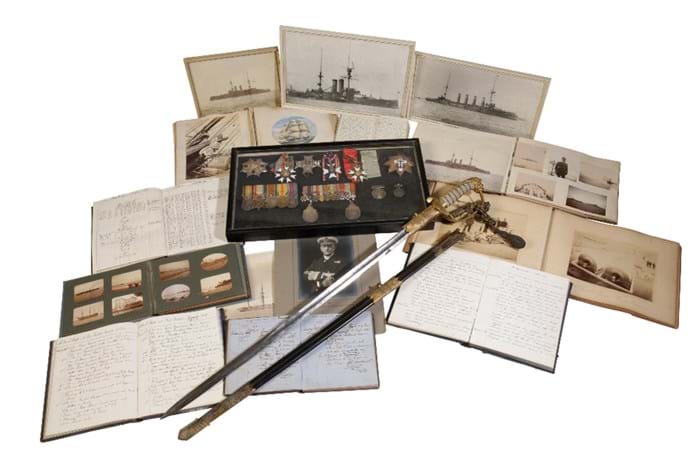 Duke’s of Dorchester sold this collection of naval medals awarded to father and son for a hammer price of £12,500.

George Edwin Patey (1814-62), born in Kingsbridge, Devon in 1814, joined the Royal Navy at the age of 12. By 1840, he had been promoted to Lieutenant in recognition of his services off the coast of Syria, and was awarded the NGS Medal Bar Syria and the St Jean D’Acre Medal. He was a Captain by 37 - a very early age for an era of relative peacetime.

Admiral Sir George Edwin Patey (1859-1935) was just three years old when his father died but he followed in his footsteps, also joining the Navy at 12. Seeing action ashore during the Anglo-Zulu War as a Sub Lieutenant in the Naval Brigade, he was made Commander in 1894, and then aide-de-camp to the Prince of Wales in the early 1900s. At the outbreak of the Great War he was commanding the Australian Naval Squadron, receiving the 1914-15 trio as a Vice Admiral of HMAS Australia.

Sought after by collectors and museums alike, the group of medals were accompanied by a collection of ephemera and a Victorian naval sword (Admiral grade) in average condition with rust to the blade. It achieved £12,500 (plus buyer’s premium). This 12in high (30cm) blue vase with gilt leaves and scrolls on a stand carries a Jiaqing mark.