A prolonged bidding battle emerged today in Buckinghamshire as the gold medal awarded to the bursar on board the RMS Carpathia, the ship that famously rescued survivors from the Titanic in 1912, sold at £45,000.

Offered at Bourne End Auction Rooms, the 14ct yellow gold Carpathia medal was presented to Ernest GF Brown in recognition of his ‘outstanding contribution’ to the survivors.

Estimated at £18,000-25,000, the medal drew interest from multiple bidders with two interested parties on the phone entering the mix early on. After the lot reached £22,000, it came down to a battle between the eventual buyer who was in the room and the underbidder who was bidding online via the-saleroom.com. The gold medal awarded to Ernest GF Brown, the purser on board the RMS Carpathia, by the Titanic Survivors Committee for his role in the rescue operation. It sold at Bourne End Auction Rooms for £45,000.

The medal was a significant rarity. Only 14 medals in gold were awarded by the Titanic Survivors Committee to the captain and senior officers of the Carpathia. A further 110 silver medals and 180 bronze medals were awarded to the junior officers and crew.

Only a few examples of the gold medal have appeared at auction in the last 30 years. One of them, the medal awarded to the Carpathia's Second Officer James Bisset, made £41,000 at Titanic specialist saleroom Henry Aldridge in 2012. Another had made £8050 (including premium) at Sotheby's back in 1998.

Examples of the bronze and silver medals appear at auction more often, with two appearing at a Charles Miller sale in 2012 – a bronze version making £4000 and a silver example fetching just under £8000. 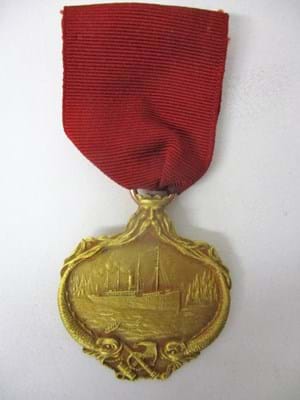 The medals were privately commissioned by the committee whose chair was Titanic survivor Margaret Brown, the American first-class passenger who became known as ‘The Unsinkable Molly Brown’. They were made by the New York jeweller Dieges & Clust and the example at Bourne End retained the original box in which it was issued.

The medals were presented to the Carpathia’s crew after the ship arrived back in New York from Naples on May 29, 1912.

The Carpathia was a Cunard Line transatlantic passenger steamship that was sailing from New York to Croatia when it received the distress signal from the Titanic. Just after midnight on the morning of April 15, 1912, the ship turned around and arrived at the Titanic’s last-known coordinates around two hours and 40 minutes after the latter had hit an iceberg.

It took over four hours to rescue the 711 survivors from the stricken vessel’s 20 lifeboats, using ladders, rigging and the ship’s forward cranes to make slings to haul up children and the infirm. A photo of the Carpathia docked in New York City in 1912 following the rescue of the survivors of the Titanic. Image: APA via Commons Wikimedia.

Ernest Brown was the 27-year-old Liverpool-born purser who handled the stewarding and accounts on board the Carpathia, having joined the ship’s crew only two months before the Titanic disaster. As the ship sped to the Titanic’s last recorded position, Brown was ordered to clear the alleyways of the ship to prevent any obstructions to the smooth running of the rescue operation.

As the Carpathia began taking survivors on board, Brown was charged with interviewing each survivor, compiling lists of passengers names, reuniting family members and relations, informing and comforting those whose relations had not survived, and assessing any medical needs.

As well as the medal from the Titanic Survivors Committee, Brown was awarded 50 guineas from the owners of the Titanic, the White Star Line.