Masterpiece London opens in Chelsea: an early look at some top objects

A fashion house founder's personal desk, a 16th century astronomy book, a pair of Chippendale commodes and contemporary Asian art jewellery: all are on offer as Masterpiece London returns for its 9th edition. Thomas Coulborn and Sons brings this Jamaican inlaid table to Masterpiece London, which continues until July 4.

The fair takes place at the Royal Hospital Chelsea. Below are a few highlights slated to appear at the show which previews today and continues until July 4. Start looking for Offer Waterman’s selection of William Turnbull works before even going through the doors to Masterpiece. The totemic bronze sculpture Large Female Figure (1991) is stationed at the turning circle entrance to the fair. Other works by the artist, including his 1962 sculpture Agamemnon, are on offer at gallery’s stand, as are pieces by artists such as David Jones, Edward Burra and Henry Moore. The London dealership has never missed a staging of Masterpiece. Jewellery specialist Wartski brings a number of pieces associated with Queen Victoria to the fair including presentation tie pins commissioned by the monarch in memory of Prince Albert and a stylised silver melon-like teapot she once gave to John Brown. This gold-mounted turquoise brooch was presented by Victoria to one of her bridesmaids in commemoration of her marriage in 1840. It is inscribed with the date to the reverse. Turquoise is emblematic of the forget-me-not flower while the Coburg eagle, with cabochon ruby eyes, was chosen in homage of the Prince’s family. Rosewood, ebony, birdseye maple, sabicu, satinwood, padouk, lacewood, palm wood, amboyna, mahogany: all are included in this 19th century inlaid table made c.1840-50 by Ralph Turnbull. He was famed for using the indigenous woods of Jamaica to dramatic effect, starting a style of his own. The table is on the stand of Thomas Coulborn & Sons where visitors will be able to examine the marquetry pictures in the top include ships, lighthouses and a letter to aforementioned Queen Victoria. Italian artist Mario Nigro (1917-92) was a pharmacologist before he started a serious study of art in 1948. A member of the Movimento d’Arte Concreta, he focused on abstract art and worked with Lucio Fontana who helped get him into the 32nd Venice Biennale. Cortesi Gallery features his work on its stand along with pieces by Gianfranco Pardi, Enrico Castellani and Walter Leblanc among others.

Reclining Nude before a Mirror II by Roderic O’Conor Roderic O’Conor (1860-1940) was a celebrated Irish painter of the late 19th and early 20th centuries. This 1909 painting is on offer at the stand of London gallery Connaught Brown, a newcomer to Masterpiece this year. Other artists represented at the stand include Auguste Rodin, Pablo Picasso and Raoul Dufy. This year returning dealer Lyndsey Ingram devotes her stand entirely to Matisse etchings from the John Kasmin collection. Exhibited here publicly for the first time, the single-owner collection is comprised of 22 small etchings from the 1920-30s and was put together by the celebrated British art dealer.

“I’ve been looking at them for around 30 years and I think I’ve squeezed all the pleasure I can out of them – it’s time for someone else to enjoy them. I’ve known Lyndsey for years – I trust her to treat them well and find a good home for them,” Kasmin says.

During and after the fair, Ingram also holds an exhibition titled Reflections on Pop at her Bourdon Street gallery. 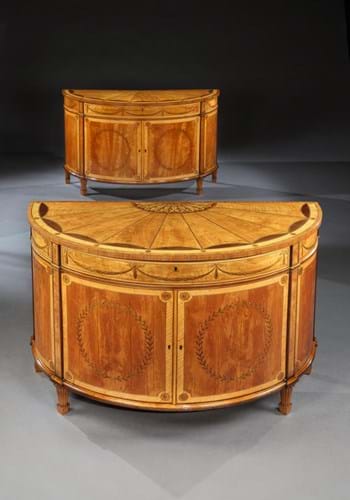 This year, the tercentenary of Thomas Chippendale, expect to see a healthy supply of pieces by the furniture maker, of his period and in his style throughout the fair, and perhaps nowhere more so than at the stand of London furniture dealership Ronald Phillips. This pair of satinwood and purpleheart demi-lune commodes from c.1780 have only recently been reunited and are now among the items on offer from the dealership both at its Bruton Street gallery and at Masterpiece. At Masterpiece, jeweller Fabio Salini balances his classic signature pieces with his new works in carbon and titanium. The Italian designer studied geology before focusing on jewellery, working in the creative departments of Maison Cartier and Bulgari before launching his first collection in 1999. He opened his Atelier in 2004 and brings around 100 works to the fair. Masterpiece prides itself on being a ‘cross-collecting’ fair – appealing not just to those buying in the traditional mould of a focused collector, but also to those whose interests are wide-ranging and purchases are varied. Some dealers capitalise on this ethos by sharing stands. This year, Daniel Crouch and Les Enluminures are joining forces and it is the former that brings this 1540 book full of lavish paper instruments used calculate historical astronomical phenomena (such as the eclipse believed to have happened during the Crucifixion). The exhibition on the joint stand is titled A Brief History of Time: From Matins to Mars. British sculptor Richard Hudson is known for the organic forms of his steel and bronze sculptures. At the fair, his sculptures, including Tear, appears along works by artists such as Marino Marini, Emily Young and Gerald Lain on the stand of Bowman Sculpture. The stars of 18 Davies Street Gallery’s stand are a desk and accompanying chair created by Art Deco designer Armand-Albert Rateau in the early 1920s for fashion house founder Jeanne Lanvin.  It was made during Rateau’s major redecoration of the fashion designer’s apartment, homes and businesses and may have been set in her bedroom. The desk features Lanvin’s monogram MJL and is made of oak and stained leather and is finished with gilt bronze handles. The gallery specialises in 20th century decorative arts. Modern and contemporary British artists feature at Piano Nobile and Euan Uglow (1932-2000) is among those on its stand at this year's fair. “I am not a still life painter. I am not a portrait painter. I am not a painter of nudes. I am just a painter,” Uglow said once. This simple, stark painting, completed in 1962, shows Uglow exploring problems of pictorial representation through his manipulation of depth and flatness. This is not a brooch. The real ‘Flower bud’ will be unveiled at the fair, and the piece in this picture is a preliminary wax sculpture. This is the first time the Taiwanese jeweller Cindy Chao has exhibited in the UK and she has selected Masterpiece as a platform to show her works that are inspired by nature, travel and culture to a new audience. The daughter of a sculptor and grand-daughter of an architect, one of her pieces is included in the collections of the Smithsonian.