This 'Boulle' marquestry gueridon is offered by Butchoff Antiques at the 10th anniversary edition of the LAPADA Art and Antiques Fair.

Taking place in Berkeley Square in London’s Mayfair, the event unites members of the trade association who bring stock to appeal to first-time buyers and established collectors.

This year Sophie Wood, who has previously worked with Clarion Events, Attias & Associates and Bloomberg Philanthropies and Media, takes over as fair manager.

Below is an early look at some of the pieces that will be on offer at the fair. Fairhead Fine Art brings this original 1976 screenprint, Huh?, by Roy Lichtenstein. Offered for £18,750, it is one of an edition of 100. The dealership specialises in drawings, prints and sculptures and household-name masters. Garret & Hurst sculpture brings this bronze c.1900 Chinese dancer, made in Vienna by Franz Xavier Bergman, which has an asking price of £3200. The dealership specialises in 19th and 20th sculpture in bronze and marble but also stocks contemporary works by Robert Glen and Margot Homan. This oil on canvas by Pieter van Loon (1801-73) is titled Traders before the Ponte della Paglio, Venice. It is priced at £24,900 from the stand of Ottocento, a specialist in rare works of art offered at affordable prices. This Roman bronze statue of Venus holding an apple and mirror c.3rd century AD is offered on the stand of Ancient & Oriental Art (aka CJ Martin (Coins) & Ancient Art) for £65,000. A collector first and a dealer since 2000, Richard Hoppé comes to LAPADA with his usual supply of European glass, tiles and scent bottles. He is a member of the International Perfume Bottle Association. He brings this c.1890 continental porcelain perfume bottle to the fair, which is decorated with birds and offered for £425. Holly Johnson Antiques is based in Cheshire. From its showroom, it offers a selection of furniture and works of art and also runs an interior design department. Among its offerings is this Piero Fornasetti trumeau, ‘Architecturra,’ which is lithographically printed and coloured on lacquered wood. Made in Italy c.1959, it is based on the Alessi Palace in Genoa. It is offered for £60,000. Fornasetti (1913-88) spent most of his life in Milan and is known in part for creating more than 500 items featuring the face of the soprano Lina Cavalieri. 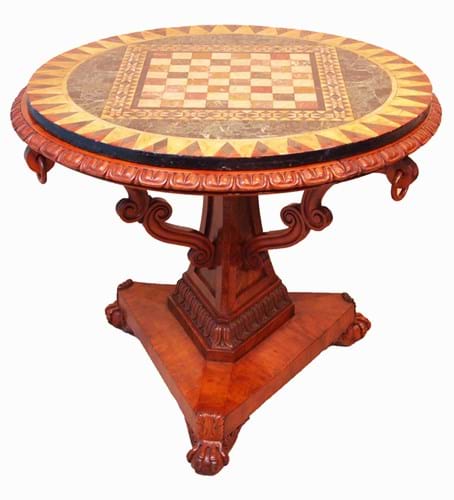 This unusual William IV period satinwood circular centre table features a pietra dura marble chess board top. Raised on a well-figured tripartite central column, it has scrolling supports and carved decoration terminating on a plateau base with carved claw and ball feet. It will be on the stand of S&S Timms Antiques where it is offered for £14,500.

This early Pre-Raphaelite work by Adrian Scott Stokes (1845-1935) is based on Song to Celia (Drink to be only with thine eyes) by Ben Johnson. Titled I sent the late a rosy wreath, the oil on canvas was completed 1879 and is inscribed verso. It is offered for £15,000. Walker Galleries was founded in 1972 and specialises in 19th and 20th century English and European paintings and watercolours. Jenna Burlingham specialises in 20th century British painting, sculpture, prints and ceramics as well as work by contemporary artists. She brings this 1934 painting, Juno Reclining, by Ivon Hitchens, which is priced between £75,000-£100,000. Hitchens was mainly a painter of landscapes and experimented with pure abstraction, but by the late 1930s had developed his highly distinctive style on a border between abstraction and figuration.