Three modestly valued works selling at regional sales below £650 included an avant-garde image of the Pont Neuf in Paris. A charcoal drawing of Ebenezer Scrooge is among three upcoming lots offered over the next fortnight. On the secondary market, French artist and engraver George-William Thornley (1857-1935) is best known through his lithography collaborations with famous artists such as Claude Monet, Edgar Degas and Camille Pissarro. This 14 x 11½in (35 x 29cm) English view of Margate was one of six Thornley oils in a sale on October 13 at Wright Marshall in Cheshire. It sold on bottom estimate. 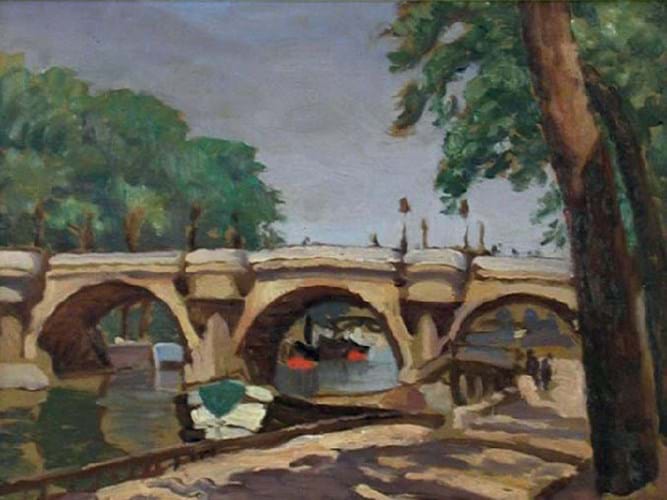 The British avant-garde painter Ethelbert White (1891- 1972) was a noted bohemian who toured the Surrey and Sussex countryside in a gypsy caravan with his wife Betty. The pair also travelled extensively in Europe, especially France, where White absorbed the influences of the Post-Impressionists. This 10 x 13in (26 x 34cm) oil on board of the Pont Neuf in Paris tipped over top estimate at Cheffins of Cambridge on October 11 – a decent sum for a work of this size and subject.

Classical woman by Conrade – sold for £130 Leeds-born watercolourist Alfred Charles Conrade (1863-1955) learned much of his trade abroad, studying at academies in Düsseldorf, Paris and Madrid. Possibly dating from his time as a student, this 18½ x 11½in (47 x 29cm) watercolour of a classical young woman with an incense burner sold within estimate at Duggleby Stephenson of York on October 12.

* Prices do not include buyer’s premium

Tavern scenes have appealed to western artists for hundreds of years, with Dutch Old Masters such as Frans Hals and David Teniers putting their stamp on the genre before it was taken up by British artist William Hogarth. There is no great name attached to this 19th century oil on board – in fact there is no name attached to it at all. It measures 6 x 8in (16.5 x 20.5cm) and is offered at Philip Serrell’s Fine Art & Antiques sale on November 8. However, the busy, naïve composition offers plenty of characters to observe. It has an estimate of £80-120. Wright Marshall’s Antique, Fine Art & Collectors sale on November 6 features View of Conway Castle, a watercolour by Anthony Vandyke Copley Fielding (1787-1855). From a family of artists, Fielding was named for both the Flemish painter and possibly the US portraitist John Singleton Copley. Fielding was an accomplished watercolour painter and exhibited regularly at the Royal Academy. This 5 ½ x 7 ½ in (14 x 19cm) composition is signed and dated 1845, towards the end of his career. It has an estimate of £70-90.

Two illustrations for A Christmas Carol – estimated at £500-600 John Worsely (1919-2000) was a prolific British artist and illustrator who served as an active service artist during the Second World War and is best remembered for his naval battle scenes and portraits of high-ranking officers and political figures. In the 1970s he moved into family entertainment, rendering large plates for televised adaptations of classic stories and transforming these as large-format prints for children. This pair of scenes, included in Dickins Auctioneers’ sale of November 9-12, is taken from the end of A Christmas Carol.  He Jumped Into The Air With Glee reads one; the other is titled Scrooge Chuckled and Chuckled. Measuring 8 x 10in (20 x 25cm) each, the charcoal, pencil and watercolour illustrations have an estimate of £500-600.