Super-salesman and artist Marcus Harvey, one of the 100 artist exhibitors at the Vauxhall Art Car Boot Fair at Hastings on July 16, had been chatting to Amber Rudd, newly appointed home secretary in Theresa May’s government reshuffle. 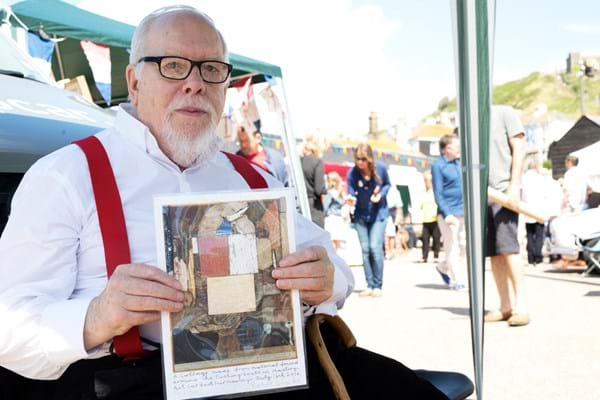 “SHE came over and picked up one of my ceramic sandcastles – maybe tellingly, it was one with the Union Jack on, not the flag of St George.

“Anyway, she didn’t buy it and although I am no Tory I congratulated her on her appointment and told her things were going to get really rough from now on. She smiled, put down the sandcastle and walked on.”

Rudd is the MP for Hastings and Rye, who was on walkabout at the fair. Despite overlooking the sandcastle, she did, however, buy a £100 limited print, Hastings Memories, by British Pop Art pioneer, Sir Peter Blake, now 84.

Sir Peter had created the series originally for his daughters from objects he found by the Hastings fishing boats.

Talking to me at the busy boot sale about his artistic heroes, Sir Peter said the most important of these was the reclusive US collage artist Joseph Cornell (1903-72), whose retrospective Joseph Cornell: Wanderlust was at the RA last year. Sir Peter created a print, Joseph Cornell’s Holiday Margate, for
2015’s Art Car Boot Fair held in the seaside town.

Wandering around the Hastings art boot, I saw the cadaverous poet John Cooper Clarke meeting, greeting and selling his expletive-overload silkscreen print Chickentown for £150. Although she wasn’t there personally this year, Tracey Emin had a line of napkins going for £60 each. The David Bowie hankies at £15 had sold out from Outside World, while there was a queue for Renaissance selfies at £5.

Prints of potatoes at £45 were going, like well, hot potatoes
and there were plenty of prints from artists Gavin Turk and Rachel Howard plus a particular local favourite, illustrator Sir Quentin Blake.

Some of the biggest crowds were around the stand of William Blanchard, whose art prints and posters were being tubed in dozens, including Pop Art Soup – Red Glitter at £310.

Back to Harvey, whose current irreverent show of ceramics, Inselaffe (Island Monkeys) is at the Jerwood Gallery in Hastings, next to the open space where the art boot was held. Despite his rejection by the home secretary, Harvey recovered and sold five of his large ceramic castles at a little over £200 and 20 of the smaller ones at £106 on the day.

The Vauxhall Art Car Boot Fair (supported by the car manufacturer) was founded in 2004 by Karen Ashton and has been held every year since – with the exception of 2005 – and mostly in London’s Brick Lane.

There are plans to take these fairs to the West Country and the west coast of the US.