A selection of 12 upcoming lots from auctions taking place around the UK. Chilcotts in Honiton, Devon, is offering 25 lots of Heal’s limed oak furniture in its April 9 sale that all come from one property. It will be the first time that any of the items have been sold since they were originally purchased by the vendors’ grandparents. The family moved into their home, a house overlooking the sea on the south Devon coast, in 1936; it has remained in the same family’s ownership ever since.

The house was furnished in the style of the day – as well as Heal’s limed oak, the auction includes two lots of Susie Cooper ceramics. Several pieces of Art Deco silver will be offered in the June 11 auction.

chilcottsauctions.co.uk or view this item at thesaleroom.com Pair of Chinese blue and white bottle vases bearing six-character Kangxi marks within a double circle to base – estimate £4000-6000 at Greenslade Taylor Hunt.

This 14in (35cm) pair of Chinese blue and white bottle vases decorated with bands of trailing peonies, bear six-character Kangxi marks within a double circle to base. The estimate is £4000-6000 at Greenslade Taylor Hunt in Taunton on April 7.

gth.net or view this item at thesaleroom.com theswan.co.uk or view this item at thesaleroom.com This rare Victorian novelty silver-gilt rose vinaigrette by Jenner and Knewstub, London 1878, has a guide of £2500-3000 at the Silver & Objects of Vertu sale at Woolley & Wallis on April 12-13.

The vinaigrette is housed in the flowerhead, with a hinged and pierced cover, with the stalk forming a handle and ring attachment. The Clocks & Instruments auction at McTear’s in Glasgow on April 28 includes, estimated at £3000-5000, this ‘Westminster Abbey’ skeleton clock, c.1880, by Swinden & Son of Birmingham.

Standing 2ft 1in (62cm) high, it has a three-train, triple-fusee driven movement with a quarter-striking repeater mechanism sounding on eight bells.

Many were given as presentation pieces with this one set with a silver plaque inscribed Presented to George Clark Esquire by his Employees Home Department in recognition of his untiring energy and as a mark of their esteem and regard for him as their Employer, along with a Gold Albert for Mrs. Clark, 83 Titchfield Street, Kilmarnock, 31 Dec 1880. Bamfords will sell ‘the complete contents of a north Derbyshire country house’ from its Rowsley saleroom on April 12 including this set of 12 upholstered oak dining chairs, by Thomas Turner of Manchester. With maker’s stamps and numbers and the date 1879, they are estimated at £200-300.

bamfords-auctions.co.uk or view this item at thesaleroom.com On April 7-8 Penzance saleroom David Lay will sell the entire contents of the studio of the St Ives artist, sculptor, writer and poet Sven Berlin (1911-99).

Berlin’s artistic career began in the heady days of post-war St Ives but was on the losing side of the acrimonious battle waged between fellow figurative painters and the abstractionists.

After leaving Cornwall, he wrote The Dark Monarch, a ‘roman à clef’ describing the atmosphere and squabbles in St Ives. Unfortunately the characters were too recognisable and defamatory. The book was withdrawn only a few days after publication in 1962 and the resulting legal actions bankrupted Berlin.

Tucked away in a rural cottage in Dorset, and marginalised by the art world, he continued to write, paint and sculpt prolifically for the rest of his life, but never with great commercial success. A large body of is work had been kept intact by his third wife Julia, who died last year.

davidlay.co.uk or view this item at thesaleroom.com This Regency tortoiseshell tea caddy with inlaid mother of pearl decoration to the front panel depicting a Chinese garden has a guide of £600-800 at David Duggleby in Scarborough on April 8.

davidduggleby.com or view this item at thesaleroom.com 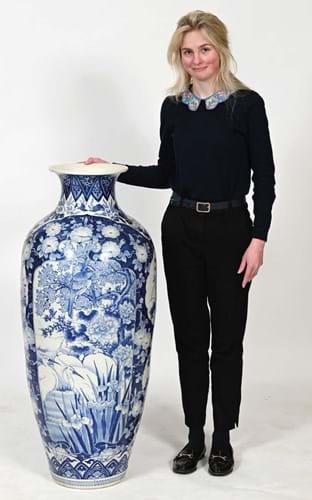 Designed and made as a floor vase rather than one to put on the mantelpiece, it had to be constructed in two sections when made in Japan over 100 years ago.

Decorated in underglaze blue with Iris, other flowers and birds it comes to the Charterhouse auction from a deceased estate in Devon. The owner, a serial collector of Chinese and Japanese ceramics, had the huge vase on a landing gallery to keep it safe in his flat.

Over the years he spent a substantial five-figure sum collecting Oriental ceramics. The family has instructed Sherborne-based Charterhouse to auction the collection without reserve.

charterhouse-auction.com or view this item at thesaleroom.com A Regency dining table by notable Carmarthen maker David Morley comes to auction on May 4 at Halls of Shrewsbury. It was commissioned by John Lloyd (1797-1875) in the 1820s for his home, Dinas, Llanfaes, near Brecon. It remained there for almost 200 years and, following restoration, was acquired by the previous owners of Bodfach Hall, Montgomeryshire, in 2008 from Lloyd’s descendant.

The extending table with an unusual telescopic action and maker’s plaque (inset) is expected to fetch up to £15,000.

As discussed in Richard Bebb’s Welsh Furniture (2007), Morley (1760-1831) was one of the pre-eminent cabinet makers in Wales at the time. His business on Lammas Street, Carmarthen, was listed in editions of The Universal, the first trade directory for the area. This pair of mid-18th century polychrome Windsor chairs are painted with the coat of arms of John Perceval, 2nd Earl of Egmont (1711-70) impaling that of his first wife, Lady Catherine Cecil (1719-52) daughter of the 5th Earl of Salisbury.

A set of similar chairs with the same red and white ground is known with the arms of the earl’s second wife, Catherine Compton, Baroness Arden of Lohort Castle. One of these is in the V&A with others offered for sale in the past 20 years. It seems they were sold when the contents of Enmore Castle were dispersed in 1899

This pair of chairs, for sale at Lawrences of Crewkerne on April 8, were from a group of eight bought at the time by a Mrs Notley of Combe Sydenham Hall, Somerset.

Combe Sydenham was later bought by the parents of the vendor when the chairs were acquired from the Notley family.

lawrences.co.uk or view this item at thesaleroom.com David Mlinaric describes his shop on the Chelsea thoroughfare as “a fascinating Aladdin’s cave of lights and lamps” where “everything is interesting and beautiful”. Beginning with a stand at Antiquarius on the Kings Road in his 20s, Butterworth moved to Pimlico Road some 25 years ago – his ‘USP’ becoming antique lighting of all periods.

Sworders’ sale on April 21 titled Let There be Light – The Christopher Butterworth Collection brings together 250 lots ranging in price from £250 to £15,000.

It includes both typical stock items and a significant selection of items from Christopher’s own collection such as this ormolu vase candelabrum, designed by architect James ‘Athenian’ Stuart and made by Diederich Andersen. At c.1760 it represents the earliest English neoclassical metalwork – other examples in the collections of Her Majesty the Queen, the Victoria and Albert Museum and Spencer House.