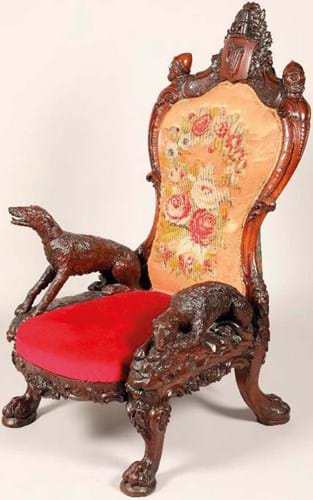 Marked for Arthur J Jones and Son of Dublin and dated 1850, it was probably part of a large suite of furniture made of Irish bog yew or oak produced for the 1851 Great Exhibition.

The carved decoration of a harp, oak leaves, stag and Irish wolfhounds was designed and decorated to illustrate the history, antiquities, animals and vegetation of Ireland. The Important Irish Art sale at Adam’s in Dublin on December 8 includes this Nathaniel Hone (1831-1917) oil on board measuring 12 x 16in (30 x 40cm). The subject is one Hone pained on many occasions, the expansive stretch of sand at Malahide Beach. The Jonathan Grimble collection of Modern British, Cornish and St Ives School is to be sold by Cornwall firm David Lay on December 7.

The sale will be on view at Grimble’s stylish seafront home in Penzance. A well-known figure in the Cornish art world, Grimble was the executor of the estate of Sandra Blow(1925-2006).

davidlay.co.uk or see this item at thesaleroom.com The Fine Sale at Cheffins in Cambridge on December 8-9 includes the Alain Rouveure collection which features 220 lots of Nepalese, Bhutanese and Tibetan art.

Rouveure, who first visited Nepal in 1979 at a moment when rare and early artefacts were readily available to buy, had the long-term intention of establishing a museum there. As the political situation makes that too difficult, he has chosen to sell part of his collection to benefit the Alain Rouveure Nepal Fund, including a large group of dancer’s masks, shamen dresses and ritual artefacts.

Elements have been regularly exhibited in Paris, Venice, Milan and Switzerland including this carved wood mask of Krodha from southern Tibet, carbon dated to 1430-1620, with an estimate of £25,000-35,000. railtons.co.uk or see this item at thesaleroom.com A portrait miniature attributed to Penelope Cleyn – estimated at £4000-6000 at Dreweatts.

A selection of portrait miniatures from the Timothy Clowes collection is being offered by Dreweatts in a timed online sale that closes on December 16.

This gilt metal framed 2¾in (7.5cm) watercolour and bodycolour on vellum portrait signed S and dated 1641 is attributed to the British painter Penelope Cleyn, with the subject in armour and white lawn collar traditionally identified as Sir Edward Harley.

Numbered 71 and dated to 1910, it was once the property of the eminent restorer Andreas Woywood. The violin was designed after Stradivari and carries a label with its number, date and is signed and branded C. Oddone Torino.

After employment as an apprentice for several years at the Turin workshop of maker Benedetto Gioffredi Rinaldi, Oddone took the unusual step of moving to London, where his more formative training took place under the third-generation French maker, Frederick William Chanot in 1889.

This helped Oddone combine the best of Italian and French methods when he opened his own shop in Turin three years later.

The violin is sold with the original copy of the receipt from when it was purchased from Woywood.

ewbanks.co.uk or see this item at thesaleroom.com The Scottish pictures sale at Lyon & Turnbull in Edinburgh on December 9 includes a number of works by Samuel Peploe (1871-1935).

This 9 x 12in (23 x 30cm) oil on canvas Still Life with Books comes from a series of still-lifes which date from c.1903, the period in which Peploe established his reputation as one of Scotland’s leading painters. After success at the Royal Scottish Academy and Royal Glasgow Institute annual exhibitions, he had his first solo exhibition in Edinburgh in 1903.

With a provenance that includes The Scottish Gallery, Edinburgh, The Fine Art Society, London, and Spink & Son, London, it has an estimate of £40,000-60,000. A pair of 12-bore sidelock ejector guns that were ordered by Empress Eugenie of France (1826-1920) is on offer in Gavin Gardiner’s auction of Modern & Vintage Sporting Guns on December 8.

Born to Spanish nobility, Eugenie was the Empress of France from her marriage to Emperor Napoleon III, until he was overthrown in 1870. She was exiled to England with her husband and son. She held considerable influence and was close to the British and Russian royal families. After the deaths of both her husband and son she settled in Farnborough.

During the First World War she donated her steam yacht Thistle to the Royal Navy and funded the military hospital at Farnborough Hill.

The maker confirms that these guns were built in 1897, and the empress gave them to FA Ernest Mallet Vaughan that year. Replacement barrels were fitted in 1974 and 1975. A large collection of work by George Bissill (1896-1973), the Derbyshire miner who became a successful artist, is being offered at Mallams.

The paintings, drawings and prints have been consigned by an Oxford lady whose father was left the contents of the artist’s home and studio in Ashmansworth, Hampshire, almost 40 years ago.

“The paintings have not been seen since they were taken from George Bissill’s studio in 1983”, says Kate Pattinson. “My father Arthur Smith cleared out the entire body of his work – a much larger collection than is offered here – and stored it in attics and cupboards and under beds.”

Mallams estimates the pictures will be bring between £15,000-25,000 and will offer the collection in three parts, the first to be sold on December 8-9. It focuses chiefly on Bissill’s early career, in particular his mining and Great War subjects.

mallams.co.uk or see this item at thesaleroom.com Ornately decorated headwear is one of the highlights of Thomas Del Mar’s sale of Fine Antique Arms, Armour & Militaria on December 8 at Olympia Auctions in west London.

This mid-18th century officer’s mitre cap is made of crimson velvet bearing a lion embroidered in silver and gold thread, incorporating glass bead eyes, within a scroll showing Manchester, the edge embroidered with laurel leaves and bound in silver lace.

olympiaauctions.com or see this item at thesaleroom.com A group of seven medals awarded to Battle of Britain fighter ace Squadron Leader Anthony ‘Bolshie’ Bartley of the RAF Volunteer Reserve will be sold by Dix Noonan Webb on December 8, estimated at £100,000-140,000.

He was one of the founder members of the famous 92 Squadron, and is credited with at least 12 victories, eight damaged, a number of probables and possibles, and countless unclaimed.

Bartley’s time as a test pilot was possibly also an introduction to his later career with the film industry. He struck up a friendship with Laurence Olivier, then serving with the Fleet Air Arm, and Ralph Richardson as well as Roger Livesey. Bartley met Leslie Howard and went on to perform aerobatics for his film The First of The Few (1942) which chronicled the life of the Spitfire’s designer, RJ Mitchell.

While stationed in the US, Bartley spent time in Beverly Hills and socialised with stars such as Clark Gable. In 1947 he married the actress Deborah Kerr of The King and I fame. He moved to Hollywood. After studying film production with MGM, he formed European-American Productions and wrote and produced television films for Fireside Theatre, MCA and Douglas Fairbanks Presents.

The medals, which are being sold by Bartley’s family, are accompanied by a selection of items and documents including a gold wristwatch engraved Tony From Deborah 11-28-53. A gallery label to verso reveals that this oil on canvas by Sir Matthew Smith (British,1879-1959) was purchased from Crane Kalman Gallery (178 Brompton Road, London, SW3) by Mr and Mrs Sydney Gilliat in January 1969.

It has come by descent to Halls’ Christmas Aauction on December 8 in Shrewsbury.

Tennants’ Militaria and Ethnographic Sale on December 3 in Leyburn includes this 17th century Hounslow broadsword by Johann Kinndt, which was made c.1640-50.

Hounslow, to the west of London, became a centre of sword manufacturing from the early 17th century, populated by highly skilled craftsmen from Germany. The area became known for high-quality blades.

Tennants says the sword has been inspected by Philip Lankester of the Royal Armouries at the Tower of London and John Tofts White, who was a renowned expert on Hounslow sword manufacturing in the 17th century. Hounslow broadswords by Kinndt (sometimes anglicised to John Kennett) are rare, but two examples are held in the collection of the V&A. Bidding opens at £80 for this rare cast aluminium letter box plate at GW Railwayana in Evesham on December 4. It is engraved with both the initials and Victoria’s crown.

gwra.co.uk or see this item at thesaleroom.com