A single seasoned timber board is adzed to shape, kerfed (slit) in the three places where they meet and then steamed, bent and pegged at the join. The front and back sides are then painted with stylised animal designs personal to owner and his family.

Kept as family heirlooms, they were used primarily for storage of food or as watertight cooking vessels. Some were traded or given as gifts at potlatches (gift-giving feasts).

Rarely do antique examples, those used in a domestic context by the Haida or Tlingit peoples, appear for sale. However, one from the 19th century or possibly earlier emerged for sale at Lawrences (25% buyer’s premium) of Crewkerne on January 17. The chest had initially made its way into one of the auction house’s general sales but had been upgraded to the catalogued sale.

Given a small catalogue illustration and a single line description – and still applied with a very Western floral fabric – it was spotted by a number of potential buyers as something worth way beyond the £300-500 estimate.

The chest ultimately sold at £19,000 to a Canadian bidder.

The series of auctions which opened the year at Lawrences had begun on January 14 with some 660 lots in the Silver & Vertu sale. This was a varied offering that included both a number of niche single-owner collections from buckles to biscuit boxes and the £40,000 medieval walrus ivory tableman pictured on the front cover of ATG No 2426.

It is often among the smallwork where the strongest bids are now registered.

A private collection of caddy spoons included a good selection of the handmade Arts & Crafts examples that are a strong suite.

A textbook Omar Ramsden spoon with a tendril handle terminating in three cabochon-set green hardstones (London 1932) took £2800 while another with a floral enamelled lug handle by Bernard Instone (Birmingham 1928) multiplied the estimate to take £1300. 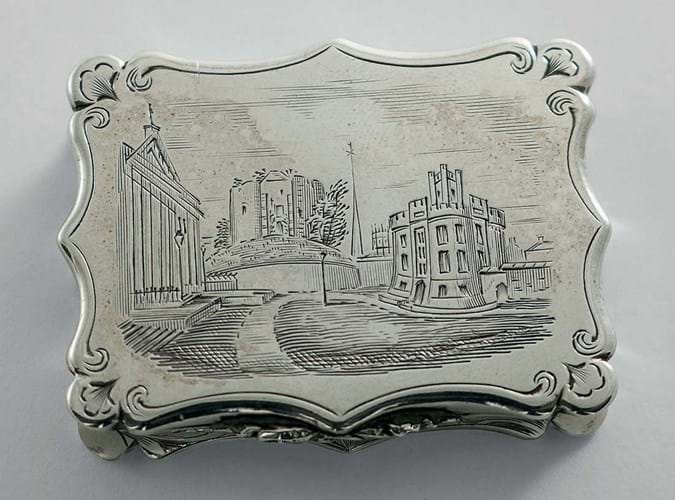 ‘Castletop’ vinaigrette by Nathaniel Mills with a rare York scene – £4400 at Lawrences of Crewkerne.

A core of committed ‘castletop’ collectors competed for a rare vinaigrette by Nathaniel Mills (Birmingham 1842).

Scenes of the minster at York are not unusual but this one, seemingly taken from an engraving of 1841, depicts the Castle Yard area with the Court House, Clifford’s Tower and a mock Tudor building that was built as a prison in 1825 and demolished in 1935. Specialist Alex Butcher, who has sold countless Mills vinaigrettes in the past, said it was a new one on him. Estimated at £300-500, the winning bid was £4400.

A collection of Victorian and later electroplated biscuit boxes included some rarities. The example modelled as a regimental battle drum with an applied monogram and crossed drum beaters carried a design lozenge and the retailer’s mark of Howell James & Co. Regent St. London. It took £650 while £700 was bid for a variant of the folding shell type: the Staniforth Patent that opens with three (rather than two) compartments. Continental model of a red squirrel with import marks for Berthold Muller – £4000 at Lawrences of Crewkerne.

Chosen as the front cover illustration to the catalogue was a late-19th century Continental model of a red squirrel seated on a branch while eating a nut. It featured English import marks for Berthold Muller, Chester.

Made in the ‘kunstkammer’ style as a cup and cover, the model stood 10in (25cm) high and weighed 30oz. It had come to sale from a regular trade consignor of typically lower-value items. This time he struck it richer with a bid from the London trade of £4000 (estimate £600-800). The same bid came against a £2500-3000 guide from a private buyer for an item of local interest. The arms to a set of five George III boat-shaped sauce tureens and covers (one large and four smaller) are those of John, the 4th Earl Poulett (1756-1812) and Sophia, the daughter of Admiral Sir Charles Pocock.

The couple lived at Hinton St George, near Crewkerne. Georgiana, Duchess of Devonshire unkindly said of the match: “Lady Hinton is the oddest little woman I ever saw – very young and so childish and vulgar that one is amazed every now and then for her to come out with very clever things. She was of great fortunem, very comical ugly face and her waist is longer than her legs.”

The 101oz tureens, each numbered to the bases and were marked for Wakelin & Taylor, London 1789.

Back among the furniture, great interest greeted a 4ft 4in (1.32m) wide oak panel carved with lions, a monkey and deer above griffin and other winged beasts. It was catalogued as perhaps 17th century or earlier and estimated at £200-300.

After it sold at £6500 to a North Country early oak dealer, Neil Grenyer of Lawrences said: “During the viewing we were offered various attributions as to its origin.

“Although the consensus was that it was most likely to be English and possibly 16th century, it was also suggested that it could have been French, Spanish or Italian.”

The selection of Chinese works of arts included a bowl with Xuande marks decorated with ladies in a garden pavilion sold at £8500. Blue and white bowls with figures, similar to other classic Ming designs, enjoyed a renaissance during the early Qing period (similar vessels are known from the Kangxi period) but this one was undated. Topping the European porcelain was a 22in (57cm) vase by esteemed French ceramicist and ‘father of art pottery’ Theodore Deck (1821-91).

This particular exercise in historicism, with a painted mark TH Deck to the base and with the original label for Ch Michaud, Bordeaux, exhibited a celadon glaze in imitation of a Chinese exemplar. Pitched at £200-400, it sold to another Continental private buyer at £2900.

“The vase had a thin crack near the base and some wear to the surface, hence the low estimate,” said Lawrences expert Simon Jones. “It was large and impressive and I thought it would go over the estimate, but I was very surprised to see the final price.”