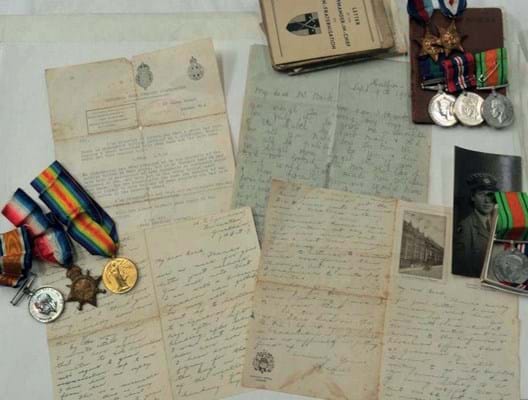 This early 20th century Royal Doulton figure of a cobbler, shown above, is estimated at £300-500 in Locke & England’s sale on July 26 in Leamington Spa, Warwickshire.

A collection of medals and letters belonging to an unsung First World War hero will go under the hammer at Unique Auctions of Lincoln on July 28-29.

The assemblage belonged to Richard Beck of the 16th London Regiment and features correspondence from a soldier thanking Beck for saving his life on the first day of the Battle of the Somme on July 1, 1916. Another letter addressed to Beck, written by the soldier’s mother, says: “How can I thank you enough for saving my boy’s life on July 1st.”

Nearly 600 lots of silver, coins and medals will go under the hammer at Fellows on July 30.

Among them is a 3in (8cm) high mid-Victorian silver novelty pepperette modelled as an owl and hallmarked George Fox, London 1863.

More than 100 lots of Beswick and Border Fine Arts will be sold as part of Tennants’ Antiques & Interiors auction on August 4 in Leyburn, North Yorkshire.

The sale will also feature a private collection of Royal Worcester horses by modeller Doris Lindner (1751-1979). It includes a limited-edition Saltmarsh Silver Crest model of a Percheron stallion. Estimate £100-150.