ATG's Review of the Year – the top stories and key sales in April 2018. Setting an agenda for much of the year, the Government revealed details of the near-total ivory ban to come in to effect in 2019.

Following months of lobbying and consultations, the details of the ban were officially announced by environment secretary Michael Gove on April 3. A small number of exemptions are proposed for items containing a small amount of ivory (known as the de minimis rule), portrait miniatures painted on ivory and other ivory works of art that are at least 100 years old and deemed the “rarest and most important items of their type”.

However, unconvinced that the measures will help the plight of the African elephant, the trade and members of the museum community are deeply unhappy. As the bill trundles through Parliament few concessions are made.

The venerable Antiques for Everyone fair also proved itself still open to change in its 33rd year. The April edition at Birmingham’s NEC, hosting around 200 dealers, involved the launch of an extra weekend-only section.

The area, open for two of the fair’s four days (on Saturday and Sunday), had no stand fittings and hosted around 30 dealers who signed up to get a feel for the event at a lower cost. It was rebranded Art & Antiques For Everyone for the July edition.

Auction house Sworders sold the primary contents of North Mymms Park in Hertfordshire – including a collection of European tapestries with a JP Morgan provenance. The 550-lot clearance over two days on April 17-18 reached a hammer total of £1.75m. The top-sellers were five mid- 16th century Belgian tapestries on the theme of the Labours of Hercules to designs by Bernard van Orley.

When last sold in 1979 these monumental weavings had totalled £105,000. This time they took a hammer total of £392,000, all going to a leading London dealer. “When I come to look back at my career, I think this sale will have been the highlight,” said auctioneer of 40 years Guy Schooling.

A terrible mistake has been made – born out of a sincere passion to do good, but a mistake nonetheless A rare 18th century variable microscope by eminent instrument maker George Adams sold for £88,000 (plus 20% buyer’s premium) at specialist science and early technology auctioneer Flints April 26-27. The instrument is signed Ann and George Adams – a reference to Adams’ second wife and son who traded under this name in 1773-75. It had been returned to the heirs of Dutch banker Fritz Gutmann whose vast art collection was stolen by the Nazis in 1940. The only known example of this shape, that imitates metal and leather prototypes, it is decorated in the early blue and turquoise of the mid-16th century with a fantastical mix of animals. Found in a seaside bungalow, this rare Western Zhou (1027-771BC) bronze, taken when the Summer Palace was sacked by British troops in 1860, sold for £410,000 (plus 20% buyer’s premium) at Canterbury Auction Galleries on April 11. It was christened ‘the tiger ying’ – a reference to the felines adorning the vessel. It was later announced it had been given by the winning Chinese bidder to the National Museum of China, in Beijing. 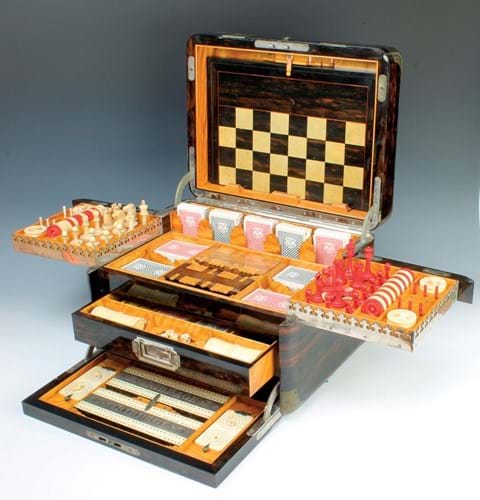 An Edwardian coromandel and chrome-mounted games compendium sold at £15,800 (plus 20% buyer’s premium) at Denhams in Horsham, West Sussex, on April 25.

Made by Drew & Sons, the interior included ivory gaming pieces and score indicators for chess, dominos, jack straws, cribbage and bezique. The lift-out trays and a roulette wheel were made in satinwood and the hinged lid was inlaid with the cypher of Edward VII.