A round-up of art and antiques news from the previous seven days, including the latest figures on the amount of treasure dug up by metal detectorists. Golden jewellery and a goddess finds

Bronze Age golden jewellery and a Roman goddess are among the discoveries dug up across the UK.

For the second year in a row, a record amount of ‘treasure’ has been found in Britain’s fields and ditches by members of the public.

The latest figures reveal 78,000 archaeological items were found during 2017, with 1267 items of treasure unearthed across England, Wales and Northern Ireland during the year.

Treasure is defined as gold and silver objects over 300 years old, or groups of coins and prehistoric metalwork.

The growth in amateur treasure hunters using metal detectors has boosted the numbers. More than 90% of the finds registered as portable antiquities were found by metal detectorists and Norfolk was the county which produced the most finds, followed by Lincolnshire and Suffolk.

Some of the most significant recent treasure finds include a Bronze Age gold bulla, a type of pendant.

The British Museum said it was found in the Shropshire Marches. The 3500-year-old item is an “exquisite example of workmanship which suggests the area in which it was found was used for rituals”.

Another recent discovery is a 2000-year-old Roman statue of the goddess Minerva which was kept for a decade in a margarine tub after mistakenly being identified as a modern copy.

The force is with Star Wars sketches

The archive of John Mollo, the concept artist behind the Star Wars franchise, came up at Bonhams last week.

Leading the sale was a personal sketchbook showing some of the first hand-drawn costume designs for Darth Vader, Chewbacca and the stormtroopers. Known as ‘Notes & Sketches 1’, the custom-bound volume dating from April 1975 to July 1976 contained not only detailed working sketches and costume designs, but also served as Mollo’s production diary with detailed entries and time-lines.

Offered as part of a stand-alone auction in London on December 11 titled Designing an Empire: The John Mollo Archive, it was estimated at £100,000-150,000 and was knocked down at the lower end of expectations.

He will lead three specialist 20th Century Design Auctions at the auction house’s Derbyshire saleroom in 2019.

Hansons will hold its first 20th Century Design/Decorative Arts/Pen Auction on February 22 with entries invited until February 1. Two more auctions will follow on June 21 and October 25, 2019. 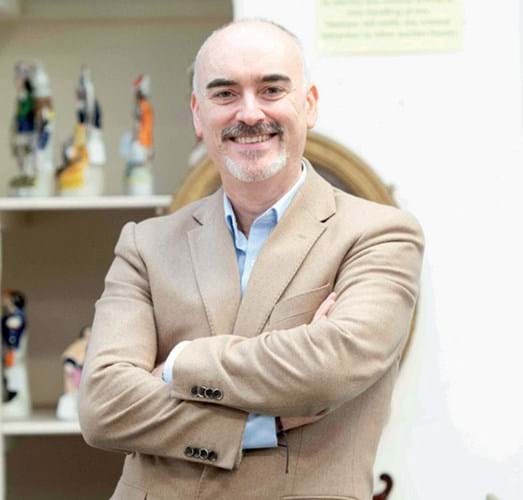 Gallery to take on ‘Antonio’ estate

London gallery Gray MCA is taking on responsibility for the estate of Antonio Lopez and his lifelong partner Juan Ramos this month.

The estate was previously represented by a dealer in Munich who is now retiring.

“As the recent film Antonio Lopez 1970: Sex Fashion & Disco (2017) so sumptuously illustrated, Lopez was central to the development of 1970s style and fashion. He was the ultimate influencer,” says the gallery’s Connie Gray. “We look forward to showcasing the very best of his work in 2019.”

The gallery has also been appointed to the advisory board of the Frances Neady collection at the Fashion Institute of Technology, New York.

Dealer and former Sotheby’s director Adrian Biddell is to join Chiswick Auctions as head of paintings and fine art.

Biddell spent 27 years at Sotheby’s, 12 years of which were in the Impressionist and Modern art department, and latterly as head of 19th century European paintings.

Later he joined Waterhouse & Dodd for two years before setting up Adrian Biddell Fine Art in 2017. He will continue to run his private dealership alongside his new role. The most clicked-on stories for week December 6-12 on antiquestradegazette.com

3 Sale of Boris Becker’s collection to go ahead next year, says auctioneer

The gold fix on December 12 was the highest of the year so far, as the political uncertainty after the withdrawal of the government’s Brexit bill, combined with a fall in the pound against the dollar, led to an increase in the price of the yellow metal.