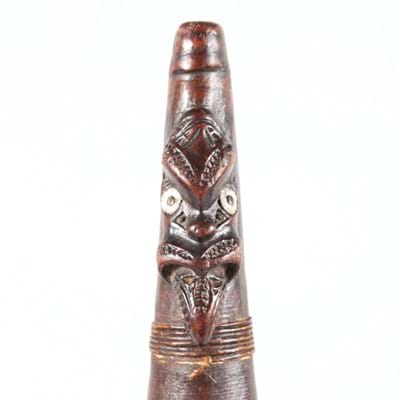 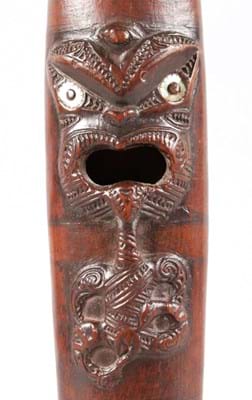 Putorino or ‘bugle flutes’ are unique to the Maori culture and most ceased to be used after contact with Europeans. Their exact ceremonial purpose is unknown but one theory is that they were played to announce the return of a chief to his village. The example in the British Museum, dated to the 18th century, was collected by the London Missionary Society.

As with the finest surviving examples, this Haslemere putorino was carved to both ends with wheku heads inlaid with haliotis shell and an open mouth worked in relief around the finger hole.

Larger than most at 19in (47cm) long, the two sections, each hollowed out like a canoe, are bound together with flax, probably kiekie roots.

A similar putorino, attributed to the southern or eastern region of the North Island, formed part of the Murray Frum’s collection auctioned by Sotheby’s Paris in 2014. It sold at €111,900.

Bidding at Nicholson’s opened well above printed hopes at £3200. Following a long battle with the room, a Paris dealer in tribal art tendered the winning bid via thesaleroom.com