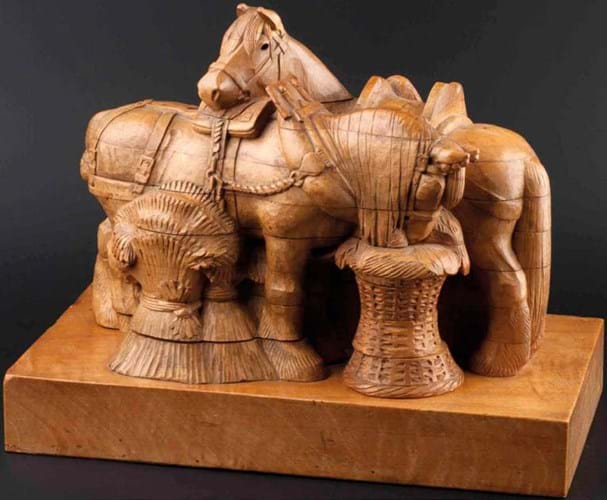 'Tribute to the Horse' by William G Simmonds, one of the great forgotten originals of the Cotswolds Arts & Crafts movement, which sold for a record £21,000 at Mallams Oxford.

Tribute to the Horse, 1956, was described by buyer Paul A Shutler as “easily the most captivating and charming object I’ve ever had the pleasure of acquiring. I blooming love it". The Cotswolds decorative arts dealer bought it for a client.

Simmonds first won a reputation in the 1920s through his oak, pine, ebony and ivory carvings of wild and domestic animals. However, his work rarely appears on the market perhaps because – as Mary Greensted, author of The Arts and Crafts Movement in Britain writes – “his work has been so treasured by its original owners, that it has rarely escaped into the glare of the commercial art world”.

This 15in (38cm) long group, among his last works shown at the Royal Academy in 1956, is beautifully carved as two shire horses at harvest time. Its layered jigsaw-like construction – made in sections fitting together with dowels – recalls Simmonds’ interest in wooden toys.

He was a skilled maker of marionettes and a puppet master – his wife Eve providing costumes for occasional performances. It will be included in a biography of Simmonds by Jessica Douglas-Home scheduled for publication next year.

Tribute to the Horse was part of a consignment of Arts & Crafts furniture from the family of West Midlands brewer Arthur Mitchell, whose father Henry founded the Smethwick brewery that would become Mitchells and Butlers.

In 1920 he bought Glenfall House, a Regency villa and parkland two miles east of Cheltenham, and employed leading figureheads of the burgeoning Arts &Crafts movement to develop his rural idyll in Gloucestershire.

Following Mitchell’s death in 1965, much of the contents of Glenfall was sold by public auction. Ten items of furniture were purchased at the sale by the Cheltenham Art Gallery & Museum, with other Glenfall items joining its Arts & Crafts collection at a later date.

Some of the 14 pieces consigned to Mallams (others were sold by The Cotswold Auction Company late last year) are thought to be part of a suite of furniture, parts of which are recorded in ledgers in the Gloucester archive that was made by Peter Waals in 1929 and 1931 ‘for Mrs R Cole’s London flat’. Cole was Mitchell’s daughter, with the furniture commissioned as a wedding present.

A panelled wardrobe and stand fashioned in a beautifully figured walnut with ebony and holly stringing comes from the Waals workshop. The ring and drop handles were probably by the craftsman Norman Bucknell, who worked a smithy in the village of Waterlane. Estimated at £5000-8000, it sold at £6200 – a relatively modest sum for a piece that ticked so many boxes. The star of Pembrokeshire studio potter John Ward (b.1938) continues to rise in the saleroom. His hand-built coiled stoneware vessels with trademark black and white matt glazes excelled again in Oxford, selling at up to £6000, while bids of £6400 and £6200 were taken for a large shouldered form vase with a light blue glaze and a smaller vessel in ochre with a green band.