A hoard of Roman bronzes discovered by metal detectors and sold at auction by Hansons in May has been sold to the Yorkshire Museum. 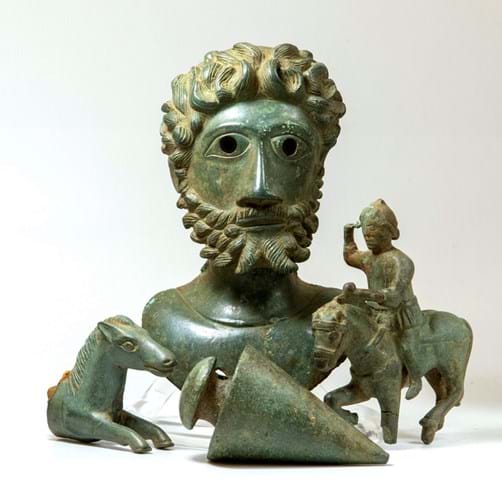 The four bronzes discovered in North Yorkshire that sold for £185,000 at Hansons in May. They have now been sold to the Yorkshire Museum via dealership David Aaron. Image courtesy of Hansons.

The collection of 1800-year-old bronze objects and was found by metal detectorists James Spark and Mark Didlick in a field near Ampleforth in Ryedale, North Yorkshire, in May 2020. It was sold at auction in Derbyshire on May 20, 2021 by Hansons for a hammer price of £185,000 (plus 30% buyer’s premium inc. VAT).

The buyer was London antiquities dealership David Aaron which is currently displaying the collection at Frieze Masters fair this week.

An agreement has been reached to sell the collection to the museum with the help of funding from US donor Richard Beleson alongside support from the Art Fund and a number of individual donors.

David Aaron did not disclose the price but the gallery chose to sell to the museum for a discounted price to ensure they would remain on public view.

The gallery added: “We are very proud to have handled The Ryedale Roman Bronzes and are delighted that they will be on permanently public display.”

Beleson, from San Francisco, who has supported the museum previously in the purchase of the Wold Newton Hoard, said: “I first read about the upcoming Hanson’s auction of the Ryedale Roman Hoard on Facebook, and the minute I saw the bronze bust of Marcus Aurelius, I knew there was only one place in the world it belonged – the Yorkshire Museum. I am really looking forward to visiting York and seeing it on display.” The bust of Marcus Aurelius discovered in Ryedale. It is part of the hoard sold by David Aaron to the Yorkshire Museum. Image courtesy of Hansons.

The hoard, known as the Ryedale Roman Bronzes, will be on display at Frieze Masters until October 17 and will then become part of the Yorkshire Museum’s existing Roman collection.

The collection, which includes a bust of the Roman Emperor Marcus Aurelius, is believed to have been buried as part of a religious ceremony. It also includes a statuette of the God of War, Mars, a handle of a knife shaped as part of a horse and a plumb bob used for engineering projects.