With estimates from £400-2000 here are five previews of upcoming items this week. A Revolutionary porcelain propaganda plate – estimated at £600-800 at Catherine Southon.

A 10in (25cm) Revolutionary porcelain propaganda plate after a design by Mikhail Adamovich is being offered at Catherine Southon’s sale in Surrey on February 24.

Painted in iron red, black and gilt on an Imperial Porcelain Factory blank, the scene depicts a factory worker holding up a banner.

Estimate £600-800. View the catalogue entry for this porcelain propaganda plate on thesaleroom.com Sold by Ewan Mundy Fine Art in 2008 on behalf of the artist’s family, it is signed with the artist’s initials and depicts one of Peploe’s most important early models.

It is offered at Edinburgh saleroom Lyon & Turnbull sale titled A Celtic Eye: A Private Collection of Scottish pictures on February 25.

Estimate £1000-1500. View the catalogue entry for this Samuel John Peploe drawing on thesaleroom.com A mahogany apothecary’s box, believed to date from c.1870 is offered at Hansons sale in Etwall, Derbyshire on February 24.

Its hinged cover lifts up to reveal a purple velvet lined interior fitted with slots, trays and pigeon holes for storing glass bottles and other medicinal items.  It has a maker’s mark for New Bond Street manufacturer Savory & Moore.

View the catalogue entry for this apothecary’s box on thesaleroom.com 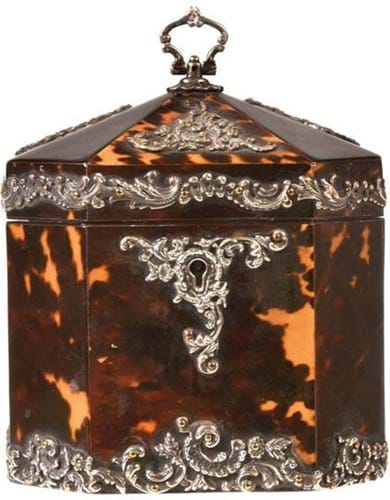 This Victorian tortoiseshell octagonal tea caddy with silver mounts hallmarked for John Rose, Birmingham, 1899, is among the items from the collection of the late Mr and Mrs John Da Silva being offered at Dreweatts in Donnington Priory.

View the catalogue entry for this Victorian tea caddy on thesaleroom.com A pair of Victorian Irish silver wine ewers with naturalistic fruiting vine decoration will be offered as part of the At Home Online Only auction held by Adam’s in Dublin on February 23.

The ewers, each standing 12in (30cm) high with a total weight of around 70oz, have marks for James Fray of Dublin. Both have an engraved crest of a wild boar’s head pierced by an arrow.

View the catalogue entry for this Irish silver wine ewers on thesaleroom.com