With estimates from £400-100,000 here are five previews of upcoming items this week. 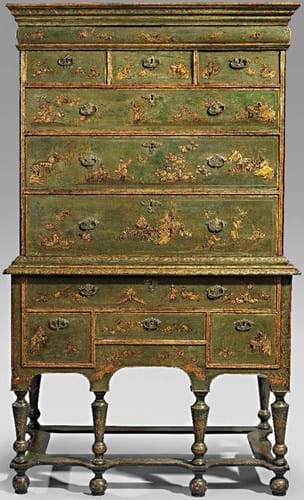 1. William and Mary chest on stand

This William and Mary green japanned chest on stand, c.1700, was acquired by the present owner from Alistair Sampson Antiques in September 1983. It had been exhibited that year at the Grosvenor House Antiques Fair and was illustrated in the fair catalogue.

View this chest on stand via thesaleroom.com.

Look closely and this painted Victorian pine door from a house in Oxford includes the heights of children written in pencil. Among the names is 'Ned'.

The door is believed to have been in the family home at 2 Polstead Road, North Oxford c.1900-06. The Lawrence family moved to Oxford in 1896 (and lived in the house until 1921). Thomas Edward Lawrence, the second eldest of five boys, attended the local high school before studying history at Jesus College, Oxford between 1907-1910.

He is, of course, best known for his legendary activities in the Middle East during the First World War and for his account of those activities in The Seven Pillars of Wisdom which later led to his 'Lawrence of Arabia' moniker.

He worked as an archaeologist for the British Museum in Syria between 1910-14 before joining the British Army, becoming an intelligence officer and fighting alongside Arab guerrilla forces in the hope of securing Arab independence. He died in a motorbike accident in Dorset in 1935. The group, including bronzes, plaster maquettes and lithographs, is by descent from artist Peter Collins (1923-2001), a significant patron to Frink in her early career. Collins purchased many works at a time when she could not afford to cast her sculptures.

Frink’s bronze Bird sculpture, pictured here, bearing a signature and dated ‘52 2/6, was cast posthumously with the assistance of the Frink Estate. It was taken from a plaster maquette purchased directly from the sculptor while she was still a student.

This work, which has never been seen at auction, relates closely to the 1952 Bird which was purchased the following year by The Tate and ‘launched’ her career. A 1925 Pleyel grand piano fitted with an original ‘Auto Pleyela’ self-playing mechanism, in a chinoiserie Louis XV case, estimated at £40,000-60,000 in the Dreweatts auction on September 23.

Dreweatts is to offer an impressive private collection of rare pianos on September 23. It was amassed by David Winston, who holds a Royal Warrant as Restorer and Conservator of Pianos to HM the Queen. It is comprised of 26 instruments dating from the 18th century to present day.

Among the lots expected to achieve the highest bids is a rare 1925 Pleyel grand piano fitted with an original ‘Auto Pleyela’ self-playing mechanism, in a chinoiserie Louis XV case estimated at £30,000-50,000.

It is the first time the collection – many of which are one-off pieces with ‘significant historic importance’ – has been offered in its entirety.

Winston has restored some of the most valuable pianos in the world, including those owned and played by the greatest names in classical music, including Beethoven, Chopin and Liszt. This pair of English enamel stirrup cups c.1820-30 in the form of hound heads with brown ears and speckled decoration is guided at £400-600 at Bishop & Miller’s timed online sale ending in Stowmarket on September 26.