With estimates from £400-22,000 here are four previews of upcoming items this week. A sale of Jewellery, Watches and Silver at Lyon & Turnbull in Edinburgh on March 9 includes this late 19th century ring set with an enamel plaque depicting a classical figure in profile.

Signed A Meyer to the reverse, perhaps for the Limoges revivalist Alfred Meyer, it is estimated at £400-600.

View and bid for this Classical ring via thesaleroom.com. View and bid for this Lowry print via thesaleroom.com. This Carette live-steam painted tinplate boat – described as Ocean-Going Steam Ship No 622/3 in the Carette 1911 trade catalogue – was made in Nuremberg for the British market.

As well as flying the white ensign, a plaque to the stern reads Clyde Model Dockyard, Glasgow.

View and bid for this tinplate boat via thesaleroom.com. 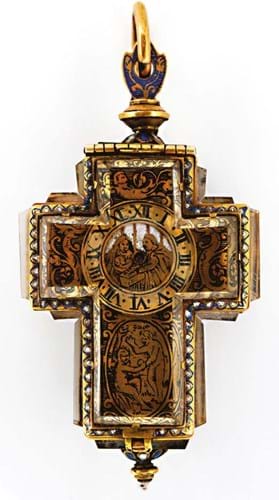 It was found in a sock drawer in a remote Dorset cottage. Contained in a little cardboard box with a pencil inscription Lorna’s watch-clock Confirmation Present from me, it is thought by the family to have been a present from her parents some 80 years ago or so.

The cruciform watch, made from brass in a rock crystal case and decorated with enamel, measures just 3in (8cm) high. The dial has a chapter ring with Roman numerals which is centred by the birth of Jesus above a vignette of Adam and Eve. The back plate, engraved scrolling foliage, is signed Drovino A Potiers.

Charterhouse says that generally it has survived the past 380 years in good condition, although it has lost its hand and the case is chipped.

View and bid for this 17th century watch via the saleroom.com.