ATG’s selection of hammer highlights this week includes a Guangxu period ‘dragon’ charger and a whimsical majolica cheese dish that both made over 30-times estimate. 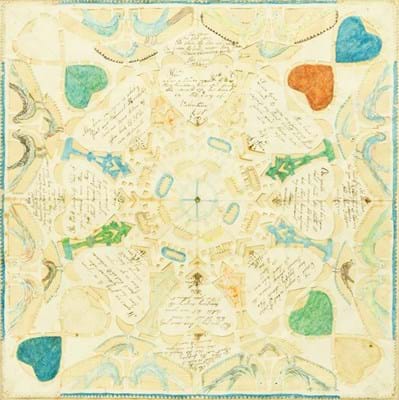 The collection of mourning jewellery and ephemera owned by the late Judith Howard, a recognised expert in Sèvres porcelain, was sold by Hansons at Bishton Hall in Staffordshire on September 27.

Pictured here is two late Georgian period cut-out Valentines offered as a single lot. Each cut with intricate patterns of doves and hearts they carry hand written verses. This larger, 13in (32cm) square, hand-coloured example opens with 'Kind Girl, alow a tender youth to send these trembling lines And speake the secrets of his heart on the day of Valentine’.

The other smaller example closes with 'If you refuse to be my wife, you will bereive me of my life, pale death at last must stand my friend, and turn my sorrows at an end'. Framed and glazed, the two sold as a single lot for £4000 (estimate £200-300). A collection of 19th century watercolours depicting the indigenous people of South America – £15,500 at Grand Auctions.

Pictured here are some from a collection of watercolour depictions of the 19th century populations of South America, seen from the viewpoint of a Western traveller.

The group of 24 competent sketches, some heavily annotated with the observations of an (unnamed) artist came for sale at Grand Auctions of Winchcombe, Gloucestershire on September 26 with an estimate of just £60-80.

Ten depicted the indigenous population and national costume while others were of the colonial population. Fierce bidding followed with the winning £15,500 tendered via thesaleroom.com. 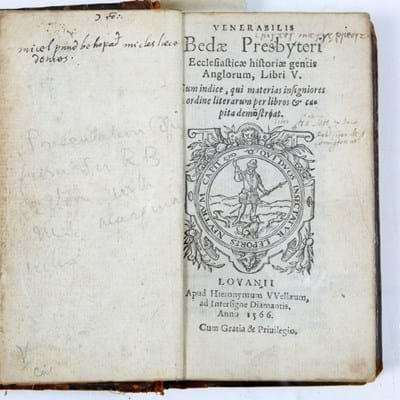 The copy that sold for a multi-estimate sum at Mallams of Oxford on September 25 was a 1566 reprint of the Antwerp edition by Hieronymus Wellaeus of Louvain. A good part of its appeal was an early pen inscription reading Liber Gra Tate ex Rob. Coton de Connington – a reference to two celebrated Jacobean politicians and antiquarians, Francis Tate (1560–1616) and Sir Robert Cotton (1571-1631).

The latter was owner of the richest private library ever created – its treasures (including the Lindisfarne Gospels) later given to the British Library. A generation ago pieces such as this splendid 20in (50cm) famille rose ‘dragon’ charger from the Guangxu period (1874-1908) were valued chiefly as decorative objects. However, appreciation of the best quality porcelain produced in the last years of the Qing continues to grow.

This piece was probably made for the imperial household: it is painted to the centre with two orange five-claw dragons within a border of precious objects and peonies.

It came for sale at Brown & Turner of Jedburgh on September 28, the property of a client in Northumberland with an estimate of £500-800.

Six internet and eight phone bidders provided some lively competition before it was sold to a UK bidder at £27,000. Sold alongside a pile of Victorian green-glazed leaf plates and dishes, the primary appeal of this lot offered at a weekly sale at Gorringes of Lewes on September 30 was a whimsical majolica cheese dish.

Although not catalogued as such, this is a well-known but rare Minton model dated c.1876 with examples having sold for as much as $20,000 at specialist sales in the past.

Although the majolica market has undoubtedly dipped since its pomp, it still looked an agreeable buy at £3200. The estimate had been a mere £80-100. This early medieval gold ring dates to the time of the Crusades – its decoration of a five-fold ‘Jerusalem cross’ suggesting a link with the Knights Templar. The Catholic military order was founded in the early 12th century to protect pilgrims en route to Holy Land but quickly became a favoured charity throughout Christendom.

Non-combatant members of the order managed a large economic infrastructure that has been called the world’s first multinational corporation.

The early history of this ring (and its find spot) has been lost but it came for sale at Pax Romana Auctions in London on September 29 from a private Kent collection formed in the 1980s.