Three bidders – one French, one Japanese and one Swedish – did battle for half an hour in the chase to acquire the skeleton of a new species of carnivorous dinosaur at a Paris auction this month. 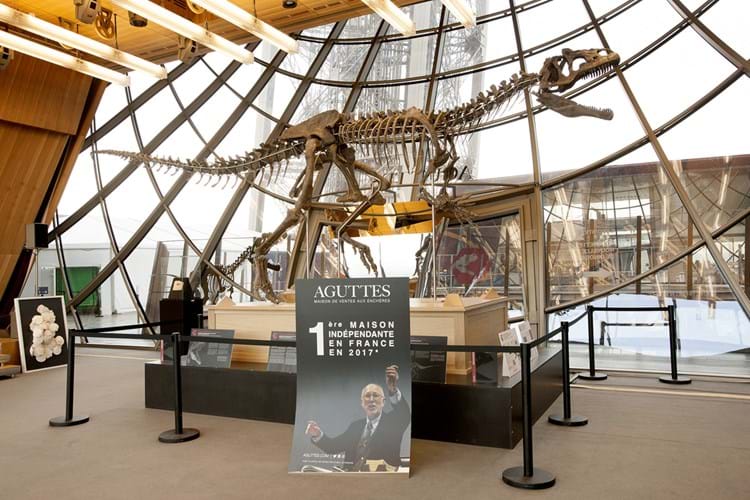 The new species of carnivorous dinosaur which was sold at an Aguttes auction held at the Eiffel Tower for a hammer price of €1.58m (£1.38m). Photo: Aguttes.

The skeleton, which measures 28.5ft (8.7m) from nose to tail and is between 152 and 157 million years old, was discovered in the US during excavations in 2013 in the Jurassic layer.

Three years later, during scientific examination of the skeleton, it was noticed that there were major differences between this specimen and other known allosauruses. These include more teeth, a stronger pelvis and different skull bones. The skeleton sold at Aguttes had differences to other known species of allosaurus. Photo: Aguttes.

The skeleton was consigned for sale to the French auction firm Aguttes. The saleroom put it on display for three days on the first level of the Eiffel Tower where it auctioned the skeleton on June 4.

After prolonged competition it made a mid-estimate hammer price of €1.58m (£1.38m) or €2.02m including premium, selling to the French bidder.

The dinosaur is to remain in France and will undergo scientific studies before being put on public display.

This is not the first dinosaur to go under the hammer at Aguttes. In 2016 the firm sold another allosaurus skeleton for a premium-inclusive €1.28m.

Last December it also sold a mammoth skeleton for €548,250 including premium.