The Horlicks collection of Robert ‘Mouseman’ Thompson furniture was sold at Sworders auction yesterday for £236,000. A Robert ‘Mouseman’ Thompson dresser with double mouse signature and the inscription H and 1930, £35,000 at Sworders sale of the Horlicks collection.

The cache of 47 lots of Yorkshire-made Arts & Crafts oak furniture, representing one of the Mouseman’s largest commissions from the prime period of his career, was being sold by British pharmaceutical company GlaxoSmithKline. GSK has recently put the Horlicks brand up for sale.

The landmark red brick factory in Slough was built in 1908 by company co-founder James Horlick (1844-1921) to produce the famous malted milk drink for the UK market. The Mouseman commission - provided in three batches (1930, 1936 and 1938) - followed the building of a new office wing in the late 1920s, with further offices and a laboratory added by the end of the ‘30s.

The collection was sold by Sworders on October 9 with an overall estimate of around £100,000 but there was a huge response. Many lots far exceeded expectations.

Leading the sale was a dresser carved with a double mouse signature, the letter H and the date 1930 (estimate £6000-8000). It had the added bonus of elaborate ironwork, probably supplied by the talented Kirkbymoorside blacksmith Will Dawson. The Robert Thompson ledger of 1930 records: Lieut. Col. AJ Horlick c/o Horlicks Ltd., Slough Buckinghamshire Dresser as sketch submitted 6'0 long x 7' high app. £45. The hammer price yesterday was a mighty £35,000. It is thought to be the second-highest ever for Mouseman, second only to the $70,000 (£40,460) bid at Sotheby’s New York in 2003 for a documentary two-section oak cupboard of 1923 from the collection of fashion designer Wolfgang Joop. A set of nine Robert 'Mouseman' Thompson oak chairs, each with burr oak back panels, sold for £8000 as part of the Horlicks collection offered at Sworders.

In the same workshop ledger, a refectory table with an adzed two-plank top carved with the Horlicks family coat of arms and the Latin inscription Labore Et Sciential (by work and by knowledge) is priced at £30 while the ensuite monk’s armchairs with mouse signatures to the front legs were listed at £6 each. The table took £28,000 while pairs of chairs sold for up to £4600.

Others items specifically mentioned in Thompson's archive are a bookcase with a single adjustable shelf and a latticed cupboard listed in a ledger dated December 12th 1938 as Messers Horlicks Ltd., Slough, Bucks, One bookcase 3ft 10½in x 5ft 4½in high £13. It doubled hopes at £14,000.

Dating of Mouseman furniture is achieved by close analysis of the construction details that changed as the century progressed. The chairs in the Horlicks group have all the attributes of early models: solid panel backs, a ‘rush rail’ mortised and tenoned to the front legs and upholstery of interwoven leather. A set of nine took £8000.

The commission also extended beyond boardroom furniture to a series of simple paper ‘in’ trays and coat stands with octagonal tops and iron hooks, each with the trademark mouse signature. The trays sold in pairs for up to £2100 (estimate £200-300), with the coat stands bringing up to £3400 apiece (estimate £600-800). 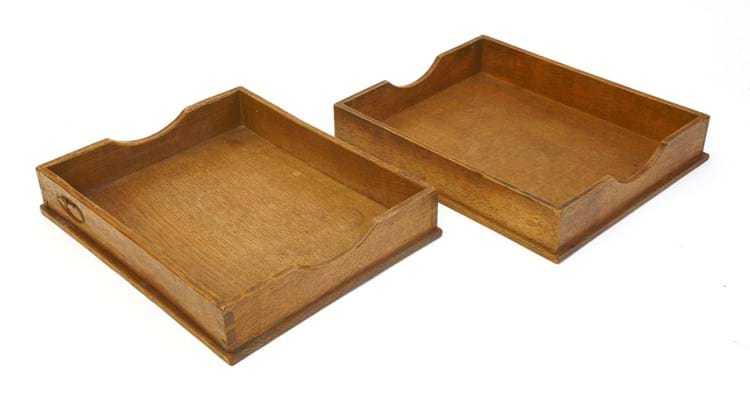 Two Robert 'Mouseman' Thompson oak paper trays, with mouse signature to one, £2100 at Sworders sale of the Horlicks collection.

This was the largest dispersal of its type since 2008 when (in 87 lots) North Yorkshire saleroom Tennants sold the fixtures and fittings of the Senior Library at Leeds Girls High School, a similar commission completed by the Kilburn workshop from 1933-34 at a cost of £1222. Serendipitously, that Leyburn sale also totalled £236,000.