The nickname ‘Lucky’ Lucan seems a strange one seeing as it refers to the infamous 7th Earl of Lucan who disappeared in 1974, shortly after the attempted murder of his, by then, estranged wife and the murder of the nanny of their children, Sandra Rivett. He was never caught, so perhaps he was lucky after all. However, the ‘Lucky’ moniker is partly explained by a lot coming up in an October 3 auction being held at Bonhams in London.

The estate of the late Lady Lucan leads Bonhams' Private Collections Sale and a Victorian silver trophy cup won by Lord Lucan in a backgammon game is estimated at £200-300.

It is engraved Clermont Club Open Backgammon Tournament October 1969. Lord Lucan was famous as a professional gambler – but that nickname of ‘Lucky’ is thought to be ironic as his frequent heavy losses meant this was rarely true.

Going back to the century before, the Lucan name was not exactly a ‘lucky’ one either. The 3rd Earl gave the order to deploy the Light Brigade at the Battle of Balaclava during the Crimean War in October 1854,

Lord Raglan issued an order to Lord Lucan to retake guns previously captured by the Russians. The order was conveyed by Captain Nolan, and in turn Lord Cardigan, commander of the Light Brigade, was instructed to lead the fatal charge towards the Russian guns.

Lord Cardigan was Lucan's brother-in-law, but the two men hated each other and were unable to work together.

Named as a killer

Veronica, Lady Lucan, was discovered dead at her London home last year, having taken a cocktail of drink and drugs after diagnosing herself with Parkinson’s disease, an inquest was told (it recorded a conclusion of suicide).

She had married John Bingham, 7th Earl of Lucan, in 1963. At the inquest into Rivett’s death, Lucan was identified as her killer, the first member of the House of Lords to be named in court as a murderer since 1760.

The whereabouts of Lord Lucan captured the public imagination and was the subject of years of intense media and public speculation. The official presumption was that he had died. Probate was granted on his estate in 1999, and a death certificate was issued in 2016. 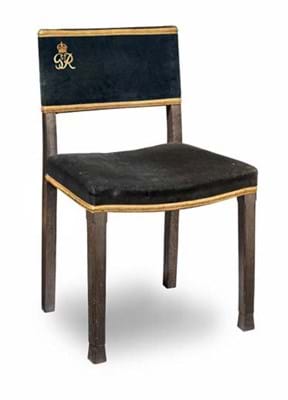 Another notable lot is the auction is a Portrait of John Bingham, 7th Earl of Lucan by the society artist Dominick Elwes. The father of actor Cary Elwes, artist Damien Elwes and the film producer Cassian Elwes, he committed suicide in 1975. It is estimated at £1500-2500.

A George III silver tray by Hannam & Crouch, London 1805, engraved with the coat of arms of the Bingham family and bearing the family motto, Spes Mea Christus (Christ is my Hope), is estimated at £1500-2500.

At a lower price level, a George VI limed-oak coronation chair, embroidered with a crowned monogram GR and stamped to the underside GR VI CORONATION with a crown, is estimated at £200-300.

The chair comes with the 5th Countess of Lucan’s admittance card to the coronation and a hard-back copy of the order of service. The coronation of King George VI and Queen Elizabeth took place on May 12, 1937 in Westminster Abbey. Each member of congregation was invited to take their chairs home.

The proceeds from the sale will be donated to Shelter, the housing charity. 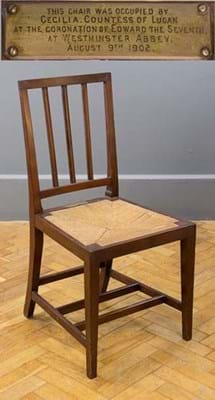 A number of items ‘formerly from the estate of the late Lady Lucan’ came up at auction in February this year at Banbury saleroom Holloway’s. They included a portrait by Lady Lucan, canes, umbrellas, a top hat, a champagne bucket, a chair which Lord Lucan’s grandmother sat on at the coronation of King Edward VII in 1902 and a coat of arms for the Lucan family.

The vintage black French silk top hat, by Locke & Co, of London, also bearing the monogram L (Lucan), 22in (55cm) diameter, together with a late Victorian mahogany sporting gun case from the same origin, sold for £2200 against an estimate of £50-80.

The 1902 coronation chair doubled the top estimate at £980. It had a brass plaque detailing this to be the chair occupied by Cecilia Countess Lucan at the coronation.