A Chinese porcelain wucai fish vase sold for £810,000 at Fellows on Monday – 450 times its estimate. Such large wucai or 'five colours' fish jars tend to date from the reign of Jiajing (1522-1566) but Fellows believed it to be 20th century. The Chinese jar with aquatic emblems that made a spectacular 810,000 at Fellows’ auction in Birmingham.

Fellows’ inaugural Antiques, Silver & Collectables auction in Birmingham yesterday included a spectacular Chinese sleeper. Lot 136, a stoutly potted jar painted with a continuous frieze of golden carp swimming amongst aquatic plants, was estimated at £1200-1800 but sold at a house record £810,000.

Large wucai (five coloured) fish jars are perhaps the best known productions from the reign of Jiajing (1522-1566), an emperor renowned as a fervent patron of Daoist causes.

The iconography is highly auspicious: emblematic of a free-thinking spirit, fish have always held an important role in Daoist imagery, while the motif of several gold fish swimming in a pond provides a rebus for the phase jinyu mantang, meaning a household filled with jade and gold.

Although it showed some signs of age (including enamel losses around shoulder, rubbing and numerous potting flaws), the auctioneers believed it to be 20th century.

The six-character Jailing mark in underglaze blue was described as apocryphal - something seemingly supported by the absence of much in the way of provenance. The jar was apparently consigned via a Chinese client. 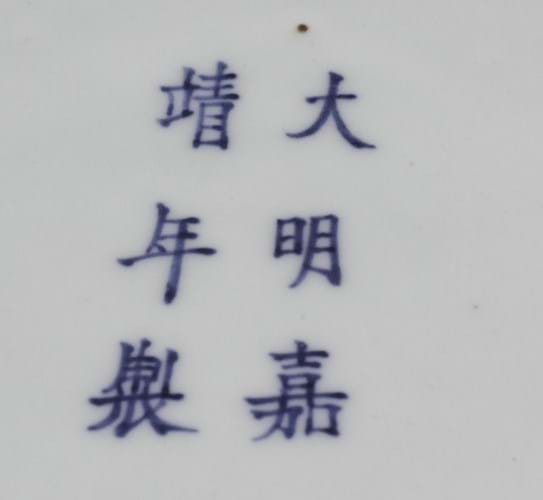 The six-character Jailing mark in underglaze blue on the jar that sold for £810,000 at Fellows.

Mark Huddleston, senior specialist said “Initial research when cataloguing had pointed to a number of precedents sold in the hundreds of thousands. However, we examined the decoration [of a brightly enamelled bold petal lappets] to the collar and felt that it lacked sophistication of these early pieces.”

Although the auctioneers received a number of condition enquiries before the sale, little prepared them for the result. Bidding had opened as predicted at £1000 before quickly spiralling into six figures as it came clear at least some who viewed deemed it to be of the period.

A bidder from Japan who had flown in to view it in person competed strongly but, at the £500,000 mark, only two other bidders in the room and one on the phone were still in the running.

Prior to the market dominance of Qing porcelain, Jiajing fish jars (originally made with domed covers) were ranked among the most desirable of all Chinese porcelains and examples can be found in many important institutional collections. The price was akin to those realised in London, New York and Hong Kong for fully authenticated pieces.