Islington Museum has paid £8000 for a screen collage by Joe Orton's lover and killer Kenneth Halliwell at a JP Humbert auction this week. 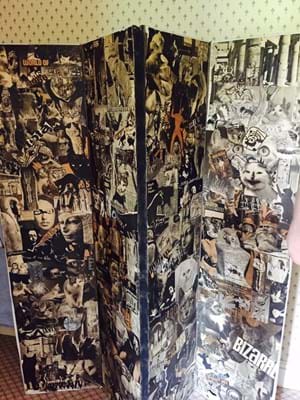 The north London museum issued a public plea to help it raise the cash to buy The Cat Screen and made the winning bid at Humbert’s collectables and jewellery auction on September 22 in Northamptonshire.

Artist Halliwell killed his partner, playwright Orton, in 1967 and then committed suicide.

The couple, who infamously defaced Islington public library books and were jailed for the crime, lived in the north London borough after meeting at RADA (Royal Academy of Dramatic Art) in 1951.

Orton rose to fame in the five years before his death and in recent years Halliwell’s art has enjoyed a growing following.

The four-panel screen was described as “an important part of 1960s cultural history as well as an engaging piece of art work”, and carried an estimate of £3000-5000.

Mark Aston, local history manager at Islington Local History Centre and Museum, travelled to the Northamptonshire saleroom and beat off competition from a telephone bidder to secure the work for a hammer price of £8000 (plus 19.5% buyer’s premium).

The museum funded the purchase with a grant from the Art Fund, a gift from an anonymous donor and smaller donations from the general public.

The screen was gifted to Orton's agent Peggy Ramsay and was then donated by the Peggy Ramsay Foundation to the Royal Court Theatre in 1999. The current vendor had bought it at a charity auction.

Aston said he was alerted to the sale by an article on ATG’s website. He said: “We have wanted to build up our collection. This screen is very rare and I couldn’t miss the opportunity.”

He added: “It is in fair condition but needs some repair as it is 50 years old and has seen some use. I hope to collect it in the next few weeks and begin conservation.”

He said the team at JP Humbert were “helpful and supportive of our interest in the work”.

Aston bought a 1966 collage by Halliwell three years ago for £2800 for the museum at an auction at Stacey’s in Essex which was televised on BBC’s Flog It!

Once restored the screen will form part of an exhibition in February at the museum to mark its LGBT History month and will again go on display in July when the museum will host an exhibition to mark the 50-year anniversary of Orton and Halliwell’s deaths.

The museum has a permanent display of book jackets that were artistically defaced by Halliwell and Orton.