The art market in the New Year traditionally gets off to a rather slow start with just a scattering of fairs, dealer shows and auctions taking place in the first half of January. 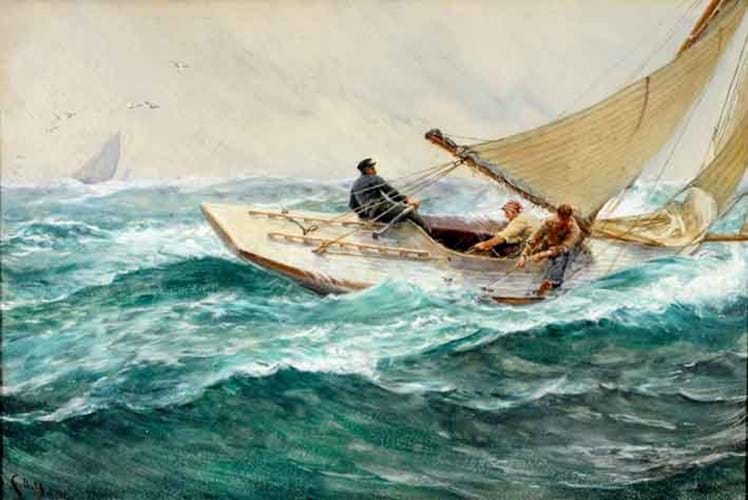 However, many members of the trade around the country are usually gearing up during this lull, surveying their stock and getting ready to refresh their holdings for the coming year. This appears to have been especially true for early 2014, with the brighter economic outlook and greater movement in the housing market leading to a more buoyant mood.

A good indication of confidence came at the latest sale staged by Lawrences in Somerset. The three-day auction on January 14 and 16-17 was something of a curtain-raiser in Crewkerne to launch 2014 and, with over 300 picture lots on offer in a range of categories and price levels, there was plenty for dealers and private buyers to chew over.

In particular, there were a number of notable marine pictures that commanded attention and drew keen bidding from the trade. These included the sale's top picture - Youth by Charles Napier Hemy (1841-1917). It arrived in a group of assorted pictures from a private West Country vendor who had no expectations that any of them might be valuable.

In the case of every other picture this was true. However, this vivid seascape which came in a plain white 1950s frame was not a print as believed by the owner. In fact it was a 17½in x 2ft 3in (45 x 68cm) watercolour heightened with white and had the distinct qualities of Hemy at his most exuberant and swirling best.

It came in good condition which made it even more desirable.

Signed with initials and dated 1902, it was estimated at £2000-3000 - a highly attractive level with little pressure being applied as to the reserve. The catalogue noted that the work was probably a study for the artist's full-scale oil painting of the same title which he exhibited at The Royal Academy in 1903 (no.89) and to which it closely relates. It is now in the Maritime Museum, Hartlepool.

Hemy frequently made watercolour sketches before developing them into his more carefully worked larger oils, but this example, even if it was a preparatory study, could be regarded as a finished work in its own right.

There were plenty of attractive trademark features here. A keen sailor himself, Hemy liked to show figures straining and boats battling against choppy waters. He also favoured positioning the horizon relatively high on the canvas, allowing him to depict the full majesty of the sea (sometimes at the expense of the masts which are often truncated, as was the case here.

While the quality of the image meant that a price of up to £10,000 was mooted before the sale, the picture had an extra element making it even more commercial. Hemy watercolours dating from after 1881, when he settled in Falmouth, Cornwall, mostly depict fishing boats, but this picture was ostensibly not a fishing scene.

More of a sailing picture, the gaff-rigged cutter was depicted as if it was racing. It therefore drew a different kind of bidder from those who might normally turn out for a Hemy watercolour.

With strong competition on the day, it came down to a contest between a London dealer and a member of the provincial trade, and it was knocked down to the former at £27,000.

The sum is the highest for a work on paper by Hemy according to Artnet.