THERE are few more commercial subjects than children. Accordingly, it was no surprise that this near life-size Italian marble group of two children playing on a balcony (pictured right) by Donato Barcaglia, dating from the late 19th century stole the limelight at Christie’s King Street (19.5/12% buyer’s premium) 19th century furniture, sculpture, works of art and ceramics sale on September 30. 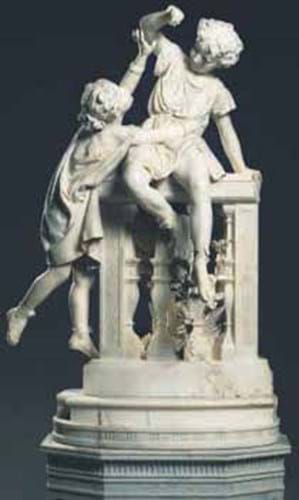 Unlike the myriad mediocre works produced in Florence and Milan at this time and sold to American and European tourists, the quality of this arresting 5ft 3in (1.6m) high work on its 2ft 6in (77cm) pedestal was a cut above the rest.

Signed by the Milanese sculptor and dating to c.1880/85, it was probably one of several copies commissioned following an exhibition of the original. Barcaglia's precocious talent came to light at the age of 17 years when his first exhibited work, The Harvester, was acquired in 1866 by the Societa di Belle Arti and placed in Milan's Palazzo Reale.

Although Christie's specialist Sebastian Davies reckoned only half a dozen Barcaglia sculptures had passed through his hands in the last decade, another example from the same group fetched £34,000 when it sold at Sotheby's London in 1990.

This privately consigned entry had previously graced the foyer of a grand country estate in Berkshire where it had suffered some damage to the upper body. Condition notwithstanding, a UK private outbid a Swiss buyer for ownership at £120,000.