It was Felix Edward Pratt (1813-94) who spotted the commercial possibilities of using new printing technology to decorate the lids of containers for popular products such as bear's grease, gentleman's relish, potted shrimps and cosmetics, with sophisticated designs. After 1840, F. & R. Pratt of Fenton in Staffordshire, became the leading (but not the only) manufacturer of multicoloured transfer printed pot lids and a huge range of related wares.

Long admired for their technical excellence, for their sheer variety and as a social and historical record of their era, pot lids have a venerable collecting history and rank among the most desirable everyday items from the Victorian period.

The process of transfer printing on pottery, which had its origins in the 1750s, was taken to its zenith in the mid 19th century. By 1848 a process of colour printing on paper patented by George Baxter in 1835 had been adapted for use in the ceramics industry - employing four different plates (blue, red, yellow and the black outline or key plate) to create polychrome decoration previously only attainable by hand decorating. The genius of Felix Edward Pratt was to apply the technology to pot lids. He employed Jesse Austin (1806-79), a gifted artist and engraver who joined Pratt in about 1843, to produce hundreds of designs over a 40-year period.

It was not just the Pratt factory that produced these transfer-printed wares. While less prolific, T. J. & J. Mayer produced items of an equally high standard and, like Pratt, exhibited at the Great Exhibition in 1851. As a general rule, few lids are marked by the potter. Together more than 550 different designs and variations have been recorded and serious collectors aim to own a good example of each one.

The subjects printed on many lids gave a clue to their contents (Pegwell Bay for potted shrimps, floral subjects for ladies' cosmetics, bears for bear's grease etc), but others depict subjects as diverse as British and European landmarks, scenes from Shakespearean plays or the Crimean War.

Black and white printed lids, which performed much the same function, are typically the preserve of the bottle collecting community but there is some crossover among some collectors.

In the main, three sizes of polychrome lids were produced (in approximately 3in, 4in and 5in diameters) with the moulded shape varying only slightly. Variations to the border decoration and the addition of a manufacturer's name can also be important when distinguishing between a common and a rare design.

However, equally distinctive is the Pratt output. Pratt also produced a small number of lids known to collectors as 'exhibition pieces' (some were shown at the Great Exhibition in 1851). Often large in size and featuring the very best examples of each print, these highly prized lids were further embellished with gilt bands and seated upon similarly decorated bases. As a general rule bases were undecorated and do not command a premium.

The same transfer-printed designs that featured on the pot lids were also reproduced on a range of related domestic items, from tea wares to tobacco jars, collectively known as Prattware. Again the scope of production is vast but these wares, too, are easily identified and the subject well covered in the collecting literature.

Pot lids have a collecting history as old as their manufacture (many were mounted in frames to hang on the wall) and as early as 1897, just three years after the death of Felix Edward Pratt, an exhibition of factory productions was held in Blackpool.

Specialist auctions were held as early as 1924 when the input of wealthy industrialists from the Midlands saw pot lids and the associated field of Baxter prints reach collecting fever pitch. 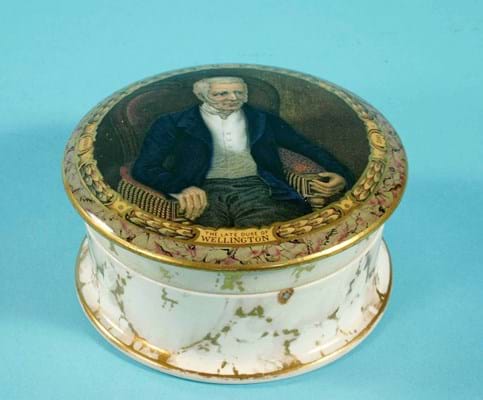 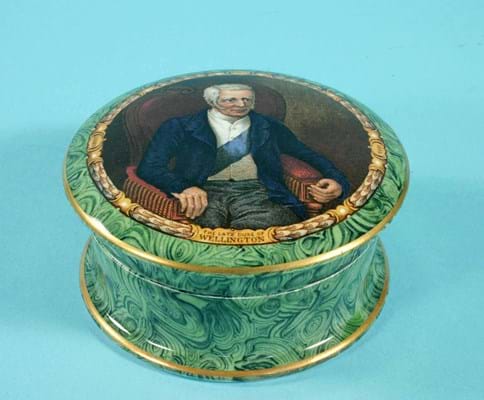 A collectors' clubn the Pot Lid Circle, started in the mid 1960s and the market peaked again in the early 1970s when - with the best lids touching four-figure sums - even the mighty Sotheby's held specialist sales devoted to the subject. Just occasionally a lid comes to the market with a collecting provenance to prove the point.

The rare lid known as The Spanish Lady sold in 2001 for £2700 as part of the Ken Smith collection. It had first been bought in 1925 by an early collector, G.E. Lambert, for the then considerable sum of £31 - a good two months' wages for a skilled working man. In 1960 another great name in pot lid collecting, J. Cohen, bought it privately for £65 and when the Cohen collection was sold in 1970 it made a huge £650.

But, collecting pot lids today need not be an expensive pastime. With fewer new collectors coming onto the scene, some prices have fallen substantially in real terms.

Antique fairs, eBay and auctions - including the regular specialist sales held by Historical & Collectable - are good places to find them. Undamaged examples are available from £30 each and the majority of lids cost under £100.

Many collectors will distinguish between a good and an indifferent example of the same lid - those with bright, sharp and precisely registered colours being preferred above those with signs of 'ghosting' or fading. Naturally restoration will detract heavily for all but the rarest lids and there is relatively little interest in the reproductions made first in the 1920s by the firm of Kirkhams (a subsequent owner of the Mayer factory) and later in the 20th century by Coalport. Fakes, although not difficult for the seasoned eye to detect, have also appeared periodically on the market. However, there has been some new blood into the top end of the buying spectrum and in recent years a clutch of rare lids and exhibition pieces have been sold for prices in excess of £3000. It gives some idea as to the movement in prices that the rare Bear's Grease Manufacturer lid sold in 1996 as part of the Abe Ball collection for £3800 was subsequently re-sold in the sale of the Hart collection in 2005 for £6600. Another version of this lid, dug up in two pieces from a disused tip in the West Midlands, was restored and fetched £5800 in September 2009.

Prattware will vary in price from £5 for one of the more common pieces to over £2000 for one of the very rare and highly decorative advertising plaques produced for firms such as Crosse & Blackwell and Huntley & Palmers. Serious collectors also seek out Jesse Austin's original watercolour designs and the engraved printing plates used in the production process.

Digging for the Holy Grail