The European Works of Art auction at Olympia Auctions in London on June 1 includes a group of eight surprise eggs by Stuart Devlin.

This particularly deluxe example in gold set with gems marked for London 1977 (shown above) is estimated at £2500-3500.

olympiaauctions.com or view this item at thesaleroom.com The Modern + Contemporary Sale at studio ceramics specialist Maak on May 26 includes this Lucie Rie vase.

It is one of two pieces that have been consigned by a fellow potter who brought them from the Ceramic Form exhibition at Kettle’s Yard, Cambridge, in 1975 when they exhibited together. Shown here is an 18th century sampler made by Martha Hayter in 1741. The Band Sampler, thus named as the decorative stitches and text are worked in bands, features figures known as ‘boxers’ due to their pose with arms raised in front of their faces in a fighting stance. However, this motif actually represents suitors carrying a flower aloft for their sweetheart.

The sampler, which is worked in silks, is offered with an estimate of £800-1200 at Tennants of Leyburn, North Yorkshire, in the Costume, Accessories and Textiles Sale on May 28. The Fine Jewellery sale at Fellows in Birmingham on May 26 includes this Art Deco platinum and 18ct gold citrine and circular-cut diamond brooch, attributed to Cartier.

fellows.co.uk or view this item at thesaleroom.com When auctioneer Stuart Purcell began cataloguing a box of 50 glass stereoscope slides he expected to see views of landscapes and monuments, the usual subjects.

Instead he saw rock climbers wearing tweed suits and flatcaps and, in one case, a skirt.

Many of the slides had paper labels for G.P. Abraham, F.R.P.S. Photo, Keswick and handwritten captions showing they were taken in the mountains of the Lake District and north Wales. One slide was dated Xmas Day. Keswick. 1899.

The photographs were taken by George Abraham or one of his two sons George and Ashley. The trio often climbed together and produced the first photographs of rock climbers in action.

The slides are estimated at €300-500 in the Collector’s Cabinet auction at Irish saleroom Mullen’s in Bray, Co Dublin, on May 28.

mullenslaurelpark.com or view this item at thesaleroom.com

This disc-playing music box is one of three examples coming up at Plymouth Auction Rooms which were purchased by the owner in Leipzig some 30 years go. This Egyptian revival lion stool with spelter lion mask and snakeskin upholstery was probably made following the Tutankhamun tomb discovery. It is expected to bring £300-500 at Locke & England in Leamington Spa on May 26.

leauction.co.uk or view this item at thesaleroom.com The pair has an estimate of £300-500 when Kinghams of Moreton-in-Marsh sells the Harry Ryans collection of Staffordshire pottery on May 28. The auction house describes it as one of the largest private collections of 19th century Staffordshire chimney ornaments to come up at auction in recent years, comprising a menagerie of animals plus historical, military and sporting figures.

kinghamsauctioneers.com or view this item at thesaleroom.com This mahogany RAF single fusee operations room sector clock dated 1941 has a guide of £3000-4000 at the Clocks sale at Gardiner Houlgate in Corsham, Bath on May 26.

Owned by the vendor for over 20 years, it was purchased from a British man who was stationed in the operations room at RAF Nicosia in Cyprus from 1954-55 where this clock is believed to have been situated. The base, which played a key role during the Suez conflict of the 1950s, later became Nicosia International Airport.

gardinerhoulgate.co.uk or view this item at thesaleroom.com trcallan.com or view this item at thesaleroom.com This 9in (22cm) wide Edwardian silver cigarette box by William Comyns & Sons, London 1902, is enamelled to the lid with a racehorse and jockey up. The presentation inscription says the horse is Marpessa – winner of the £1000 National Hunt Steeplechase at Warwick in March 1902. This George II carved walnut open armchair is similar to a set supplied by Daniel Bell and Thomas Moore in 1734 to the ‘Honourable Counsellor Rider’ of Sandon Hall, Stafford, at a cost of £27.10. 00.

The Dictionary of English Furniture Makers 1660-1840 (1986) by Geoffrey Beard and Christopher Gilbert records Bell as a St Martin’s Lane cabinetmaker who was in partnership with Thomas Moore from 1724. Moore may have been a son of the royal cabinetmaker James Moore.

The chair, with a retailer’s label for Norman Adams, come for sale from a London private collection at Dreweatts’ Fine Furniture, Sculpture, Carpets, Ceramics and Works of Art sale in Donnington Priority, Newbury on May 30-31. The auction is on view at Kirtlington Park, Oxfordshire.

Anthropomorphic dogs getting up to mischief was a favourite subject of French artist and cartoonist Boris O’Klein (1893-1985). This watercolour scene of anthropomorphic dogs urinating against a wall – one of them taking aim at a cat – is one known from prints.

michaeljbowman.co.uk or view this item at thesaleroom.com Marked for London maker Thomas Chawner, 1783, it was last sold by Sotheby’s as part of the contents of Easton Neston on behalf of the Hesketh family in 2005.

dugglebystephenson.com or view this item at thesaleroom.com 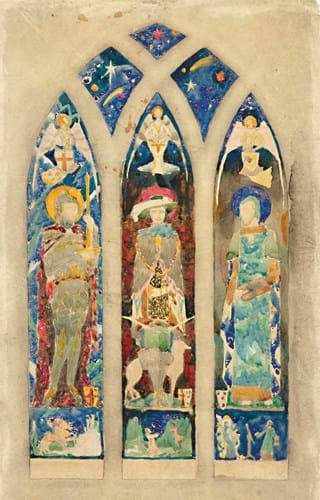 The Important Irish Art sale at Adam’s of Dublin on June 1 includes this 1927 watercolour by Harry Clarke (1889-1931). The 14 x 9in (35 x 22cm) design depicting St Hubert, St Luke and St George was for the Brooke memorial window at St Brigid’s Church of Ireland, Castleknock.

Raymond Brooke had commissioned Clarke to create a window to commemorate military, hunting and artistic members of his family. In May 1927 when the commission had been confirmed Clarke noted in his diary: “Bear in mind to give the maximum light and rich colour. Excellent light and position. Will stand rich colour and treatment. Subjects in base could be seen.”

With labels for Grants Fine Art Gallery and The Fine Art Society, the watercolour is guided at €6000-10,000.

adams.ie or view this item at thesaleroom.com