Time for a commercial break

Try original advertising artwork if you want to capture the atmosphere of an era. The original design for Trooping the Colour by Albert Edward Halliwell, dated 1929, together with a copy of the finished London Underground poster – £1350 at Canterbury Auction Galleries.

Rarely is the mood and style of an era better captured than in its advertising.

And for that reason, commercial art – the slightly derogatory term given to artworks produced exclusively for branding and promotional purposes – is increasingly appreciated in the marketplace.

Precious little is known about Halliwell – he attended Southport Art School from 1923-26 and then The Royal College of Art before opening a design agency – but his blue-chip clients in the kaleidoscopic world of inter-war commercial art included London Transport, Green Line coaches, the All-England club at Wimbledon, Kellogg’s, Bryant & May, Boots the Chemist and the Regent’s Park Zoo.

Some of his designs became well-known travel and wartime posters.

However, he later chose to apply his talents to teaching, initially at the Camberwell School of Art where he established the first course teaching industrial design, and then at the Central School of Arts and Crafts in Camden from 1948-70. The contents of Halliwell’s studio comprised hundreds of designs from the 1920s-40s that were intended to be worked up into posters, product labels and advertisements.

Mostly done in gouache with pencil annotations, they are typically much smaller in scale than the finished posters or labels and leave spaces for typographical information such as event dates, tube and bus stations etc.

It included both Halliwell’s best works (some used, others apparently rejected) and pieces by students or employees that he clearly admired and thought worth keeping for posterity.

Many elements of the collection – owned by the artist’s family - were previously on loan to the National Art Educational Archive at the Yorkshire Sculpture Park, near Halifax.

They were offered at Canterbury in just over 300 lots (many of them multiples) with estimates ranging from £60-80 for minor studies to £3000-5000 for one of the better-known works in the collection: the original design for a Second World War Dig for Victory poster. It failed to get away during the sale but found a buyer later on at £1500.

Poster art by little-known painters can fall between different collecting areas. Unlike, for example, the usual relationship between print and original work of art, it does not always command significantly more than the original posters themselves. Typically, these works are smaller (half size or less) and lack the wall power of a quad or royal quad-sized image. It was the London Underground posters, sporting designs and the Art Deco scenes evocative of speed that performed best on the day.

These were led by the 11 x 18in work Lawn Tennis Championship Meetings, a striking 1930s design for the London Underground. Pencil annotations included printing notes Space for date to the left and Stations to the right. Estimated at £600-800, it took £3800 online – a new auction benchmark for the artist that hitherto had rarely featured in sales. Sold at £3200 (estimate £1000-1500) was the 20 x 12in design titled Underground to Escape the Fog. This design probably dates from 1926 when bitter winter weather and regular ‘pea souper’ fogs led many Londoners to consider the Underground as a place of relative warmth and brightness. A similar poster titled It is Warmer Below was made that year by the artist Frederick Charles Herrick.

A succession of artists produced posters for the Trooping of the Colour. Halliwell’s heavily stylised geometric design was used in 1929. The original 6 x 9in draft was offered with a copy of the final signed lithograph poster and sold for £1350.

Reflecting the twin inter-war aspirations of speed and travel was a design of seaplanes flying above a cruise liner, sold for £1600 against an estimate of £500-700, the same price being paid for another showing speeding aircraft, a train and a racing car (this one unsigned). 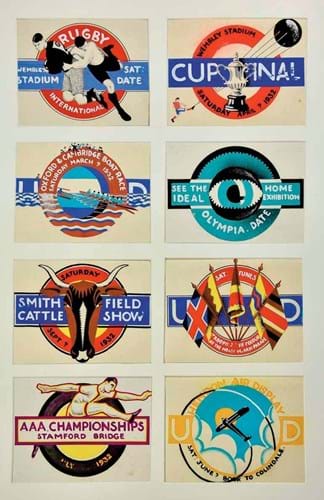 Eight small Underground designs incorporating the famous red and blue bull’s-eye logo, dating from 1932 sold for £2300, against an estimate of £500-700. The various events they promoted were the FA Cup Final, the Boat Race, the Ideal Home Show, the Hendon Air Display, the AAA Championship at Stamford Bridge, the Smithfield Cattle Show and a rugby international at Wembley.

Library of a fruitful thinker on agriculture